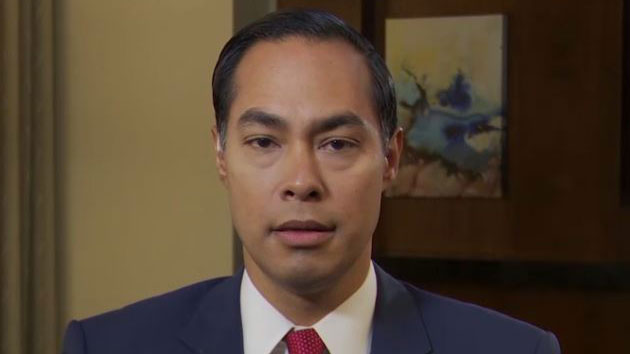 (WASHINGTON) — Presidential candidate and Texan, Julián Castro, repeated his calls for gun control legislation after a mass shooting in El Paso, Texas, on ABC’s This Week Sunday.The former Housing and Urban Development secretary also said, “It’s so unfortunate that not only our president, but his administration can’t rise up to the challenge of leadership in these times,” in response to Acting White House Chief of Staff Mick Mulvaney’s statement on the mass shooting in an earlier interview on This Week Sunday.Fellow 2020 presidential candidate and the former congressman who represented El Paso, Beto O’Rourke, said that “it’s incredibly heartbreaking to see what these families are going through right now.”In a separate interview with ABC News Chief White House Correspondent Jonathan Karl on This Week, he talked about some of the victims he met, including a woman who was shot in the chest and her mother who was also shot.As for President Donald Trump’s rhetoric, O’Rourke said, “He doesn’t just tolerate. He encourages the kind of open racism and the violence that necessarily follows that we saw here.”Twenty people were killed and 26 people were injured in a mass shooting Saturday at an El Paso, Texas, Walmart, officials said.Another mass shooting occurred in Dayton, Ohio, just over 12 hours later. Police have said nine people are dead and more than a dozen are wounded.Authorities in El Paso identified the suspect as Patrick Crusius, 21, of Allen, Texas. An assault style riffle, similar to an AK-47, was found at the scene of that mass shooting, officials said.El Paso Police Chief Greg Allen said authorities are examining a “manifesto.” They believe was written by the shooter and shows a possible “nexus” to a hate crime.Cielo Vista Mall, where the Walmart is located, is one of El Paso’s most popular malls, especially among Mexican tourists who come to the U.S. to shop. At least three Mexican nationals were killed in the attack, Mexican President Andres Manuel Lopez Obrador said.