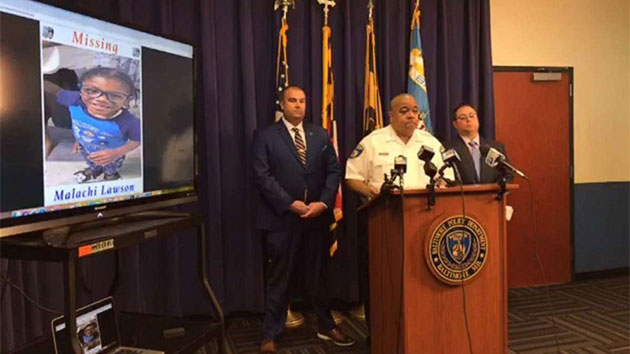 (BALTIMORE) — The body of a 4-year-old Baltimore boy who was reported missing on Thursday been has been recovered from a dumpster, after authorities said on Saturday that his mother confessed that he “was not missing, but deceased.”

Malachi Lawson was reported to have disappeared from his grandmother’s house on Thursday in northwest Baltimore.

“Last night after extensive interviewes with Malachi’s mother … she confessed that her son was not missing, but deceased,” Baltimore Police Commissioner Michael Harrison said at a press conference Saturday afternoon. “She subsquently gave detectives the location of the child’s remains.”

Lawson’s biological mother and her partner were arrested and will be charged with neglect that resulted in the death of a minor, Harrison said, noting that more charges could be added after the completion of an autopsy.

The boy’s body was found in a dumpster near his grandmother’s home, according to authorities, who said there were “obvious signs of injury” but would not elaborate on the type of wounds the child had sustained.

The search for Lawson had escalated quickly. On Friday, the FBI joined local agencies searching for the boy and Baltimore Police had pleaded with the public to share information as recently as Friday evening.

Police believe the child was killed on Thursday, when he was reported missing. When Lawson’s mother reported him missing, she told police he was last seen wearing a white tank top, khaki shorts and black flip flops. On Saturday, police declined to answer whether his body had been found fully-clothed.

The child’s had been described by investigators searching for him as having braided hair and he walked with a limp due a broken femur he sustained as an infant, police said.

About 100 volunteers, many from the Baltimore Shomrim Safety Patrol, joined the search for Lawson on Friday morning.

“A lot of us are fathers,” said Heshie Klein, vice president of Operations for the Shomrim Safety Patrol, told Baltimore ABC affiliate WMAR-TV. “A lot of us are grandfathers and you have a 4-year-old child missing, defenseless. It struck a nerve.”

‘Ted Lasso’? ‘WandaVision’? ‘Mare of Easttown’? Who will clean up on Sunday’s Emmy night?
Shannen Doherty says breast cancer is “part of life”: “I never really complain”
Philadelphia pays $2 million to woman beaten by police, separated from her son
Teens turn to COVID-19 vaccine advocacy as most state laws prohibit minors from being vaccinated without consent
Gabrielle Union opens up about “heartbreaking and terrifying” racist encounter from 2019
Norm Macdonald, influential comic and ‘Saturday Night Live’ star, dead at 61