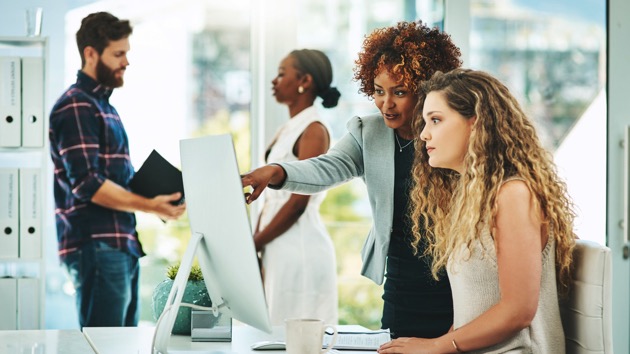 (NEW YORK) — Using the word “aggressive” in a job listing discourages almost half of potential female applicants from throwing their hats in the ring, a new study from LinkedIn revealed.LinkedIn released its latest data analysis, “Language Matters Gender Diversity report,” detailing how word choice impacts every step of the workplace experience, starting with the job search.Certain words in a job description will discourage women from even applying to jobs, the study found. As many as 44 percent of women were put off from applying for a job if the word “aggressive” was used. In contrast, only 33 percent of men would be discouraged.Another third of women wouldn’t want to work somewhere described as ‘demanding,’ the report said.The analysis also touched on how men and women are likely to present themselves in job interviews.The top three words for both men and women when describing themselves in a job interview were: “hard-working” (58 percent of women and 49 percent of men), “good at my job” (48 percent of women and 42 percent of men) and “confident” (42 percent of women and 40 percent of men), the study said. However, women were more likely to describe their character: like ‘likeable’ (38 percent of women and 29 percent of men) and ‘supportive’ (39 percent of women and 32 percent of men).”The words people and companies use to describe who they are and what they do have a direct impact on [employees] experience at work, and which companies they are attracted to,” the report stated. “Paying attention to and being deliberate about word choice during interviews, in talent branding materials and on social media can help employers attract, build and retain more gender-diverse teams, while creating a more inclusive environment for all employees.””We took an in-depth look at the words men and women use in the world of work: from their LinkedIn profiles to interactions on LinkedIn, to the language used throughout the recruitment process and in the workplace itself,” the report stated. “We also analyzed language used in the press and on social media to describe public figures.”Overall, both men and women react positively to being described by more definitive language such as ‘powerful,’ ‘strong-willed,’ and ‘confident.’For example, Facebook CEO Mark Zuckerberg is described as ‘powerful’ six times as often as chief financial officer Sheryl Sandberg.Copyright © 2019, ABC Radio. All rights reserved.