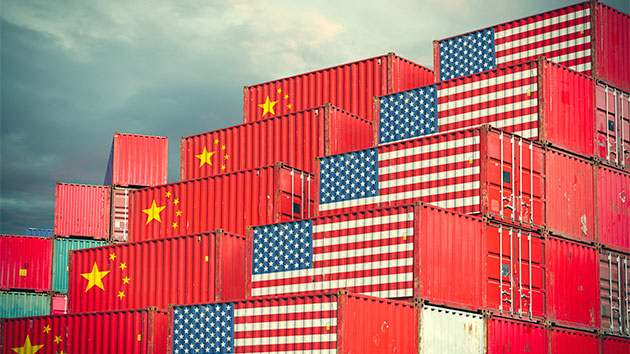 (WASHINGTON) —  Back-to-school shoppers may escape the brunt of the latest round of tariffs — but holiday shoppers could be facing sticker shock.

On Thursday, President Donald Trump unleashed new threats of tariffs on an additional $300 billion on Chinese goods sold in the U.S. amid ongoing, and increasingly strained, trade talks with China. Unlike the first three rounds of tariffs, the newest round, slated to hit Sept. 1, are poised to hit consumers on everyday items including clothes, shoes, toys and electronics.

“This latest list is a direct hit to consumers — roughly 60% are consumer products,” National Retail Federation (NRF) spokesperson Bethany Aronhalt told ABC News. “Everything and the kitchen sink is on this list, literally. Kitchen sinks are on the list.”

Shoppers may not see an increase in prices for back-to-school shopping because that usually starts in July, according to the NRF. In addition, retailers stocked up on supplies, anticipating tariff hikes. Import taxes are paid when items arrive in the U.S., months before the goods hit shelves.

The latest action would be in addition to the tariffs already imposed on $250 billion in imports from China. It breaks a promise Trump made in June to not impose more tariffs while trade talks continued and now places an import tax on virtually all remaining goods not previously caught up in the trade dispute.

“The U.S. will start, on September 1st, putting a small additional Tariff of 10% on the remaining 300 Billion Dollars of goods and products coming from China into our Country. This does not include the 250 Billion Dollars already Tariffed at 25%,” Trump said in a surprise announcement on Twitter on Thursday.

It is unclear whether the administration’s trade rep, Robert Lighthizer, or Treasury Secretary Steven Mnuchin, supported the president’s sudden move.

Manufacturers were quick to voice their opposition to the hikes.

“Tariffs are taxes on American consumers,” Rick Helfenbein, president and CEO of the American Apparel & Footwear Association, said in a statement. “The president’s decision to proceed with adding these additional costs for hard-working American families is truly shocking. This decision will increase the tariff bill on all clothes, shoes, and home textiles, like blankets and sheets – products that already account for the vast majority of the duties collected by the U.S. government. The fact that this tweet comes after only one meeting with the Chinese delegation following the resumption of talks is extremely concerning.”

In 2018, 42% of apparel and 69% of footwear sold in the U.S. was imported from China, according to the American Apparel & Footwear Association.

The tariffs could also impact small businesses, which don’t have as much of a cushion to work with, leaving little choice but to pass the increased costs on to shoppers.

“Retailers still want to protect their customers against potential price increases that would come with any additional tariffs, but with the latest proposed tariffs on hold for now and warehouses bulging, there’s only so much they can do,” NRF Vice President for Supply Chain and Customs Policy Jonathan Gold said.

Ohio man charged for bomb threat targeting reproductive health center
Emmy Awards host Cedric the Entertainer says he’s committed to improving conditions for Black comedians
Tyra Banks defends Olivia Jade ahead of her ‘Dancing with the Stars’ debut: “Olivia is so brave”
Murdaugh murders and mysteries timeline: Key events in the South Carolina family’s scandals and deaths
Alaska once had the highest vaccination rate. Now it’s in a COVID-19 crisis.
Priyanka Chopra responds to growing criticism over ‘The Activist’: “The show got it wrong”