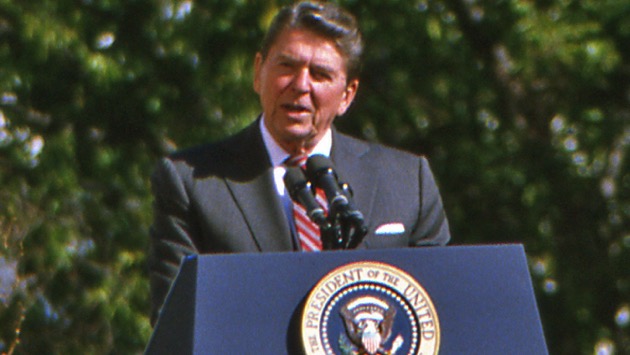 (NEW YORK) — The daughter of former President Ronald Reagan has written an op-ed in the Washington Post denouncing her father’s recently uncovered racist remarks as “ugliness” but asking for forgiveness.“There is no defense, no rationalization, no suitable explanation for what my father said on that taped phone conversation,” Patti Davis said in the op-ed posted Thursday.The recording was released by the National Archives and published Tuesday by The Atlantic.On the private phone call from October 1971 between Reagan, then-governor of California, and then-President Richard Nixon, Reagan can be heard on the recording calling United Nation delegates from African countries “monkeys,” venting about delegates who voted against the U.S. to have the United Nations recognize the People’s Republic of China.“Last night, I tell you, to watch that thing on television as I did,” Reagan said.“Yeah,” Nixon replied.“To see those, those monkeys from those African countries—damn them, they’re still uncomfortable wearing shoes!” Reagan added.Nixon responded with a huge laugh.Davis, in her op-ed, asked the public to forgive her late father for words “that should never have been uttered in any conversation,” but that these remarks were an “aberration.”“The words he used in his conversation with Nixon cannot be interpreted as anything but ugliness. That’s what makes this so painful,” she wrote. “Legacies are complicated, though, and for people to be judged fairly, the landscape of a lifetime has to be looked at.””If I had read his words as a quotation, and not heard them, I’d have said they were fabricated,” Davis writes. “That he would never say such things. Because I never heard anything like that from him. In fact, when I was growing up, bigotry and racism were addressed in my family by making it clear that these were toxic and sinister beliefs that should always be called out and shunned. I can’t tell you about the man who was on the phone with Richard Nixon that day in 1971. He’s not a man I knew.”However, this is not the first time the former Republican president has been criticized for racist remarks.During his 1966 campaign for governor in California Reagan told a crowd of supporters that, “If an individual wants to discriminate against Negroes or others in selling or renting his house, it is his right to do so,” according to Politico.He also, famously, began the “welfare queen” stereotype against black women, helping create a narrative that black women abuse taxpayer dollars to support lazy and lavish lifestyles.Historians have also cited “racist policies” he implemented during his presidency to disproportionately harm people of color which laid the groundwork for his “War on Drugs.”This previously unheard audio recording has surfaced during President Donald Trump’s relentless Twitter attacks on four minority progressive congresswomen and Baltimore Democratic Rep. Elijah Cummings.Trump has often referenced Reagan during his presidency and even shares a slogan Reagan used during his 1980 campaign, ‘Make America Great Again.’Trump has repeatedly defended his statements including tweeting that he doesn’t have “a racist bone in his body.”A July Quinnipiac poll found that 51 percent of Americans view Trump as a racist.Copyright © 2019, ABC Radio. All rights reserved.

These vaccine mandates are already in place to attend school in the US
Confused about boosters? Here are some answers
COVID-19 live updates: US reports highest daily death toll in nearly 7 months
Derek Chauvin pleads not guilty in 2017 excessive force case involving 14-year-old Black boy
Apprehensions at the southern border surpass 200,000 in August
Democratic drama as House advances Biden’s agenda: What’s in the draft reconciliation bill?