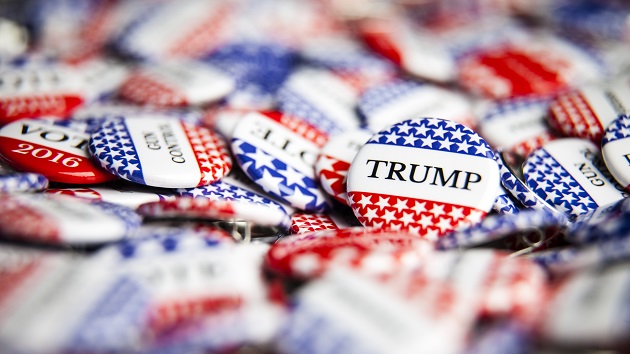 (CINCINNATI) — Speaking before a packed arena in Cincinnati, President Donald Trump touted his administration’s agenda, while continuing his attacks against inner-city, Democratic lawmakers.”For decades these communities have been run exclusively by Democrat politicians and it’s been total one-party control of the inner cities for a 100 years,” he said. “Look at ’em; we can name one after another, but I won’t do that. Because I don’t want to be controversial.”Without providing evidence, the president went on to claim that the “the homicide rate in Baltimore is significantly higher than El Salvador, Honduras, [and] Guatemala,” adding, “I believe it’s higher than Afghanistan.”The president did not provide any specific numbers, but vowed to check.”In our country, think of that,” Trump said. “We’ll check the numbers, and if we’re wrong they will tell us tomorrow, it’ll be headlines. I do believe the rate is higher than Afghanistan.”Throughout the course of the rally, the president’s remarks were interrupted by scuffles between protesters and supporters. In one instance, a protester holding a pro-immigration banner was escorted out of the arena after a group of Trump supporters attempted to grab the sign out of his grasp. The president paused his remarks for more than three minutes to let the incident play out.On the heels of the latest round of 2020 Democratic debates, the president also took aim at his challengers across the aisle, while only singling out Sen. Elizabeth Warren and former Vice President Joe Biden from the crowded field of candidates.”Democrats spent more time attacking Barack Obama than they did attacking me,” the president joked.Ahead of Trump’s appearance, Vice President Mike Pence also took a swipe across the aisle.”Those Democrats were standing so far to the left I thought that stage was going to tip over,” Pence said.The campaign rally comes as the president faces accusations of using divisive political rhetoric as a 2020 political strategy to divide the country and unite his base ahead of the election.Leading up to Thursday’s rally, the president has doubled down on his attacks on Rep. Elijah Cummings, a black Democratic congressman who he labeled “racist” and referred to Baltimore — part of the district Cummings represents — as “a disgusting, rat and rodent infested mess” in which “no human being would want to live.”Those comments came on the heels of the president’s attacks on four American congresswomen of color stating they should stop criticizing the government and “go back” to where they came from. Two weeks ago, the president took his days-long online attacks to the campaign trail, singling out each freshman lawmaker at a rally in Greenville, North Carolina. His supporters reacted with raucous chants of “send her back!” when he mentioned Rep. Illhan Omar, D-Minn., who immigrated to the United States from Somalia as a child.The president allowed the chant to go on for 13 seconds without a single word, though he later stated he disagreed with the “send her back” chants.The thousands of supporters at that rally launched into prolonged boos at just the mere mention of Reps. Alexandria Ocasio-Cortez, D-N.Y., Rashida Tlaib, D-Mich., Ayanna Pressley, D-Mass., and Omar.As he departed the White House on Thursday for the rally, Trump wouldn’t commit to trying to stop the crowd if they break into a similar chant and said “I don’t know that you can stop people.””I don’t know,” Trump said. “I can’t tell you whether or not they’re going to do that chant. If they do the chant, we’ll have to see what happens.”The president was pressed a second time on whether he would tell the crowd to stop, and suggested it is out of his hands, adding he’d have to make a game-time decision if it does occur.”I don’t know that you can stop people. I don’t know that you can. We will see we can do. I would prefer they don’t but if they do it, we’ll have to make a decision then,” he said.Following the president’s Twitter attacks, Cummings was asked by ABC News Chief Anchor George Stephanopoulos on This Week, “Do you believe President Trump is a racist?”Cummings responded, “I believe he is — yes, no doubt about it. And — and I tried to give him the benefit of the doubt.”

One black Trump supporter tells me he finds the president’s attacks on lawmakers of color racist.So, I asked why he still supports him?He said President Trump is “the best candidate that we have right now” & said the president has delivered on the economy for blacks. pic.twitter.com/SwK3S98vMo

Trump stirs racial controversy ahead of Cincinnati rallyIt has been two weeks since the “send her back” chants, but the conversation surrounding the racial tension and division in America remains the same.On Tuesday and Wednesday, the crowded field of Democratic presidential candidates flocked to Michigan for a second round of debates. Democratic National Committee Chairman Tom Perez accused the president of trying to “distract” and “divide” around racial lines.But the president’s reelection campaign insisted the president’s attacks are on the basis of record, not race. A campaign official told ABC News that the four congresswomen and Cummings are “obsessed” with overturning the results of the 2016 election and the president’s attacks are in response to that, much in the same way he has attacked House Speaker Nancy Pelosi, D-Calif., Rep. Adam Schiff, D-Calif., and Sen. Chuck Schumer, D-N.Y.The president also feels Cummings should spend more time focused on the conditions of his district, not attacking the president, the campaign official told ABC News.The Trump campaign has continued to elevate the president’s attacks with the release of two edited videos: one, attacking the four minority congresswomen, and the other defending the president’s attacks on Cummings.The president has repeated the claim he is the “least racist person in the world.””The word is so overused. It is such a disgrace. I’m the least racist person in the world, as far as I’m concerned,” Trump told C-SPAN in an interview on Tuesday. “They use it when they run out of things to criticize you on. They call you a racist. Now, in some cases its true, there are people that are racist. There are bad people. But with me, they have a hard time getting away with it.”But a Quinnipiac University national poll released Tuesday shows American voters say Trump is a racist, 51 percent to 45 percent. Among black voters, the divide deepens, with 80 percent to 11 percent citing the president as a racist. The president, when asked by ABC News, stated “the fake news does not report it properly.”The president has consistently credited his administration for low unemployment numbers for black Americans, among other minorities.While black unemployment levels are low, they are twice as high as white unemployment rates at the national level and in 14 states and the District of Columbia, according to data available from 21 states and Washington, D.C., analyzed by the Economic Policy Institute (EPI) in April.Three years ago, Trump posed a question to black voters during the campaign: What do you have to lose?”I say to the African American community, what the hell do you have to lose? I will fix it — I will fix it, I will make it good, I’ll bring back our jobs. We’ll have good education, we’ll have great safety in the inner city,” the president said at a rally in 2016.In August of that year, he made a prediction.”And at the end of four years, I guarantee you, that I will get over 95 percent of the African American vote, I promise you, because I will produce — I will for the inner cities and I will produce for the African American,” the president said in Michigan in August 2016.Copyright © 2019, ABC Radio. All rights reserved.