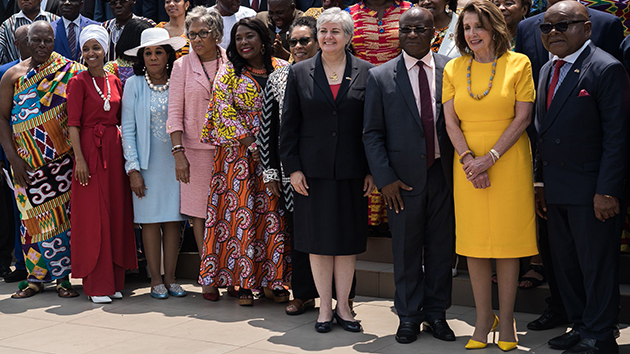 (WASHINGTON) —  After President Donald Trump told four congresswomen of color, all U.S. citizens, to “go back” to where they came from, Rep. Ilhan Omar said she did just that, returning to “Mother Africa” with House Speaker Nancy Pelosi by her side.

Omar, a Somalian refugee, shared photos of the two walking through historic slave sites, including the dungeons at the Elmina Castle where slaves were tortured, and a memorial to the slave trade in Ghana — the “Door of No Return” — through which slaves were loaded on ships.

“They said ‘send her back’ but Speaker @SpeakerPelosi didn’t just make arrangements to send me back, she went back with me,” Omar tweeted with photos of herself and Pelosi wearing an African pattern kente stole around her neck.

They said “send her back” but Speaker @SpeakerPelosi didn’t just make arrangements to send me back, she went back with me ✊🏽So grateful for the honor to return to Mother Africa with the @TheBlackCaucus and commemorate The Year of Return! #Doorofreturn #Ghana pic.twitter.com/0yVBLcAEs5

Her reference was Trump to lashing out at Omar during a rally in North Carolina earlier this month. Trump stood back and listened while supporters chanted “send her back” after he spoke about Omar.

Pelosi traveled to West Africa, along with members of the Congressional Black Caucus, to address the Ghanaian Parliament and affirmed the U.S.’s partnership with Ghana, while also recognizing the 400th anniversary of the start of the transatlantic slave trade.

“Today was deeply transformative. We saw the horrors of slavery & humbly walked through the “Door of Return” with a renewed sense of purpose to fight injustice & inequality everywhere,” Pelosi tweeted with photos of herself and natives dressed in African garments.

The trip took place during the lawmakers six-week congressional break. They return to Washington the second week of September.