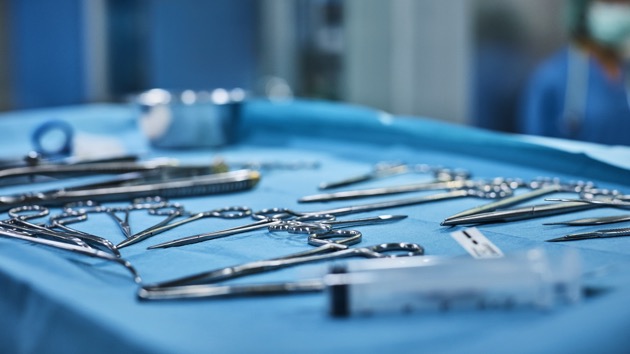 (CANTON, Ohio) — An Ohio woman was forced to undergo numerous amputations after she was infected by a bacteria that turned out to be from a dog’s saliva, her family said Thursday.Marie Trainer had both her arms and legs partially amputated and still may need more surgeries, Gina Premier, her step-daughter, told ABC News.“[The doctors] described it as just the perfect storm,” Premier said. “Somehow the dog saliva entered her system and caused this case of events.”Trainer, of Stark County, first started feeling ill in early May after returning from a trip to Punta Cana. She originally thought it could have been the flu, but when her symptoms quickly worsened over the course of 12 hours, she was rushed to the emergency room.Doctors said she was suffering from both liver and kidney failure but were not sure what was causing it, prompting Premier and Trainer’s husband to move her to a different hospital for a higher level of care.Trainer was taken to Aultman Hospital in Canton, Ohio, where she was placed in a medically-induced coma for about 10 days. Premier is a nurse practitioner at the hospital.It was there that her family learned she needed to undergo amputation, though they still didn’t know what was wrong.“We didn’t know if she was going to live or die because we didn’t know what was causing this,” Premier said. “We didn’t know what it was but the bacteria that was causing this was causing her limbs to die.”After visiting another clinic for a second opinion on the amputation, the doctors from Aultman called to say it was capnocytophaga.Capnocytophaga is a blood infection that originates in the mouths of dogs and cats. In rare cases, like Trainer’s, it spreads to humans through bites, scratches or close contact with the infected animals.Most people who have contact with a dog or cat do not become sick, according to the Centers for Disease Control and Prevention (CDC). Trainer has undergone eight different surgeries since returning to Aultman, Premier said. Last Saturday was her most recent one, though she may potentially require more.Premier said Trainer is now awake, and her family is hopeful they can get her out of the hospital soon so she can begin rehabilitation.“She’s medically stable and has a very positive outlook,” Premier said. “She’s very hopeful to get back to some form of life.”A GoFundMe created to help with Trainer’s medical bills has already raised nearly $15,000.Copyright © 2019, ABC Radio. All rights reserved.

“The world has changed. He hasn’t” – ‘Curb Your Enthusiasm’ teaser reveals premiere date for Season 11
R. Kelly accuser, documentary producer speak out after guilty verdict: ‘These women are like heroes’
After quitting the fashion industry, supermodel Halima Aden is back — this time, on her own terms
Vaxxed ‘Dancing with the Stars’ pro Cheryl Burke quarantines after positive COVID-19 test
“It was a mistake of some sort”: ‘The View’ co-hosts Sunny Hostin & Ana Navarro COVID-19 negative after on-air scare
WWII veteran finally meets woman who wrote him a letter 12 years ago