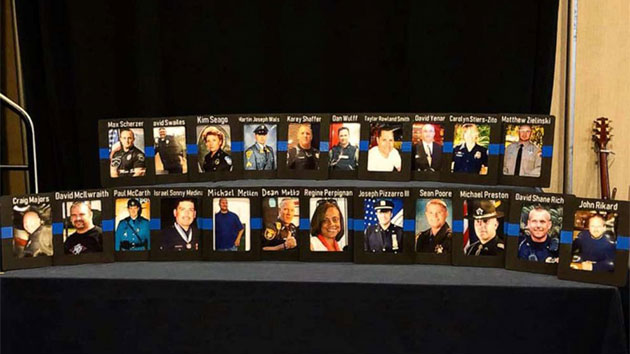 (NEW YORK) —  When an off-duty New York City police officer shot and killed himself in his home on Staten Island as reported by WABC last week, it was the department’s fifth suicide since June and the seventh this year — part of what law enforcement advocates are calling an increasingly disturbing problem nationwide.

According to statistics just released by Blue H.E.L.P. a nonprofit organization that tracks law enforcement suicides, 114 officers nationwide have taken their lives so far in 2019, as of Aug. 1.

Organization officials said that, so far, reported suicides are up 24% this year over last. Over the same period in 2018, law enforcement suicides totaled 92.

The latest suicide in New York was part of a “disturbing” trend for law enforcement, Karen Solomon, the founder of Blue H.E.L.P, told ABC News.

The organization goes through a painstaking process of calling families to verify the death was by suicide, and is currently the only database in the country that collects law enforcement suicide data.

“I think that the courage all of these families are showing coming forward is going to have a tremendous impact on stigma reduction and awareness,” Solomon said. “When it’s hidden, we don’t know the scope of the problem and it’s not being taken seriously.”

Police departments around the country see law enforcement suicides as an ever-present challenge, including breaking through the stigma surrounding the problem.

“You smash the stigma, you save lives,” said Jon Adler, a former police officer and the director of the Bureau of Justice Assistance at the Department of Justice at an event in April.

The suicide numbers came in the same week that the National Law Enforcement Officers Memorial Fund released its mid-year line of duty death statistics showing that 60 officers nationwide have died in the line of duty so far in 2019.

“The numbers show twice as many police officers have taken their lives as [have been killed] in the line of duty, which makes this the number one issue for police departments around the country,” Chuck Wexler, executive director of the Police Executive Research Forum told ABC News.

After the latest suicide in New York, NYPD Commissioner James O’Neil reminded officers that there is help available, in a message that resonated around the country.

“To every member of the NYPD, please know this: it is okay to feel vulnerable. It is okay if you are facing struggles,” O’Neill said. “And it is okay to seek help from others. You may not know this, and it may be hard to imagine, but you are not out there all by yourself. More people than you know, who wear the same uniform as you do, share the same doubts and fears and struggles that you do.”

“Seeking help is strength,” he added. “Talking about your problems is strength. Acknowledging you need a place to turn is strength. There is no shame here — only a promise to provide you with the help and support you need and deserve.”