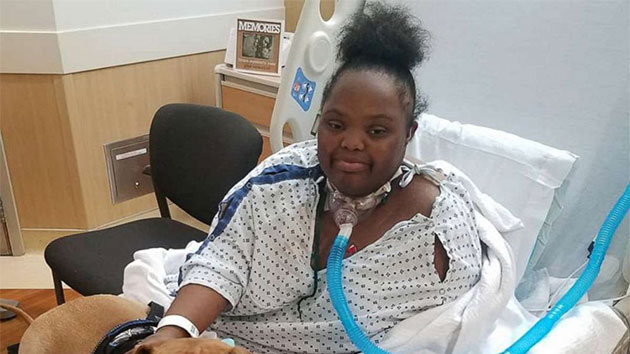 (COLUMBIA, S.C.) —  When Shantell “Shannie” Pooser arrived at the airport in Columbia, South Carolina, a surprise was waiting for her and her family.

Although it was a flight she’d taken countless times to Cincinnati, Ohio, this time she was headed there to receive a life-saving surgery at Cincinnati Children’s Hospital Medical Center.

Pooser, 17, has Down syndrome and a terminal illness characterized by a series of airway defects called laryngomalacia, tracheomalacia and tracheobronchomalacia. She is American Airlines’ first honorary flight attendant.

But on Wednesday, when Pooser arrived at the airport, a celebration was underway just for her. There was a red carpet, cake, streamers, balloons and princess crowns and wands.

“It’s important to celebrate her now. She needs to see the love and the support she has. And, the love and support that she’s gotten from American Airlines is beyond what I could ever ask for,” Miller-Berry said. “We will forever have these memories. No matter what the outcome, I’ll be able to say, as a parent, that I did everything I could to save my baby.”

The party had been organized by pilots and flight attendants working for American Airlines and PSA Airlines, a wholly-owned subsidiary of American Airlines. And, when she arrived in Cincinnati, another party was waiting for her in the airport.

“It’s important for American to take care of people on their journey because that’s what we do. We’re taking people to some of the most important parts of their life,” PSA pilot Capt. Matthew Coelyn.

American Airlines said in a post on its website that its employees had formed bonds with the 17-year-old during her many trips from South Carolina to Ohio.

In 2018, Shantell Pooser had even been given the title of honorary flight attendant by PSA Airlines after flying more than 50 flights from Columbia, South Carolina, to Cincinnati, Ohio, the airline said.

On Wednesday’s flight, Pooser walked the aisle on the plane, wearing her wings and dressed as a flight attendant — but wearing a sash and crown — and handing out snacks to the passengers.

“Her smile will just light up a room,” said PSA flight attendant Casablanca Francis said in a video posted by American Airlines. “She has so much joy.”

On Thursday, Pooser’s family said that the festivities held by the airlines’ had powered the teenager through her surgery at Cincinnati Children’s Hospital and that she was recovering.

Alaska once had the highest vaccination rate. Now it’s in a COVID-19 crisis.
How COVID-19 hybrid immunity could be a potential pandemic game-changer
What to expect as FDA advisory panel debates Pfizer COVID booster shots
Democratic drama as House advances Biden’s agenda: What’s in the draft reconciliation bill?
Ken Jennings, Mayim Bialik to host ‘Jeopardy!’ for remainder of 2021
After testifying on sexual abuse, Aly Raisman says she hopes ‘somebody listens to us’