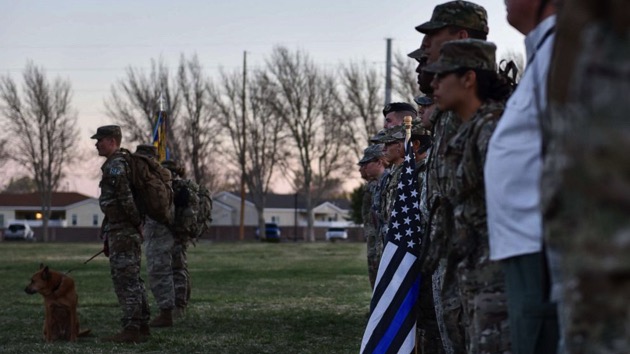 (WASHINGTON) — The top Air Force general has ordered commanders to pause operations for one day to address the rising number of suicides in the service.Gen. David Goldfein, chief of staff of the Air Force, wrote in a letter to commanders on Thursday that the service has already lost 78 airmen to suicide this year.”If we do nothing, we will end 2019 with upwards of 150+,” he said.The Air Force lost 103 airmen to suicide in 2018. Air Force Magazine was first to report on the directive.”Hopeful to hopeless… what is going on?” Goldfein asked in the letter. “It is our job to find out.”Commanders have a 45-day window to decide when they will take the day-long operational pause and have been ordered to “include leadership at every level in both planning and execution.””Suicide is an adversary that is killing more of our airmen than any enemy on the planet,” Goldfein said. “You and I have sworn to ‘defend against all enemies, foreign and domestic.’ Suicide attacks sometimes with and often without warning. Make this tactical pause matter. Make it yours and make it personal.”The Air Force also provided a video message from Air Force Chief Master Sgt. Kaleth Wright to help commanders frame their conversation.”This is the start of an ongoing dialogue about the force’s well-being — it’s going to require continuous engagement,” Air Force spokesperson Maj. Will Russell told ABC News in a statement. “The collected feedback will drive changes to programs if necessary, as well as inform more effective ways to empower leaders at the lowest level.””This ‘Resiliency Tactical Pause’ is about giving our Airmen time back to connect and break down barriers to getting help. The Air Force is taking a day to actively seek feedback on resiliency; every unit will choose a date between Aug. 1 and Sep. 15 that doesn’t disrupt operations and training,” Russell said.Goldfein’s directive shines a light on suicides within the active duty force, which hit a six-year high in 2018.The Military Crisis Line is available 24/7 at no cost to active duty, Guard and reserve members, their families and friends. Contact the Military Crisis Line at 800-273-8255, then press 1, or access online chat by texting 838255.Copyright © 2019, ABC Radio. All rights reserved.