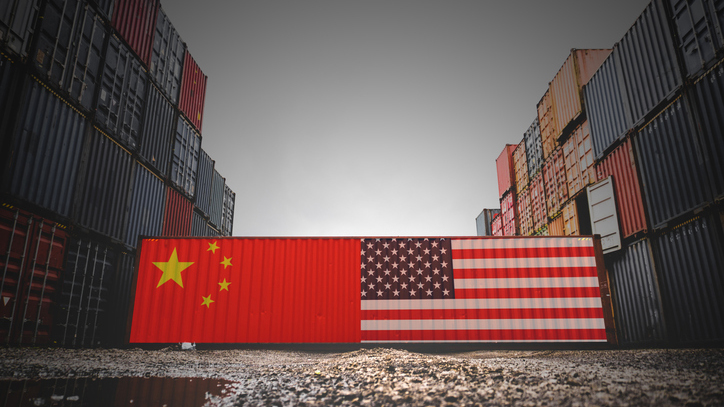 (WASHINGTON) — President Donald Trump escalated his trade war with China on Thursday, announcing that the U.S. will impose tariffs on an additional $300 billion in Chinese imports beginning on September 1, breaking a pledge he made in June not to do so while trade talks continued.The U.S. already had placed tariffs on $250 billion in Chinese goods, and with this latest action, the Trump administration is imposing an import tax on virtually all remaining goods not previously caught up in the trade dispute.“The U.S. will start, on September 1st, putting a small additional Tariff of 10% on the remaining 300 Billion Dollars of goods and products coming from China into our Country. This does not include the 250 Billion Dollars already Tariffed at 25%,” Trump said in a surprise announcement on Twitter. The president has long threatened to impose additional tariffs of China in his year-long trade battle with China but had backed off the threat following his face-to-face meeting with Chinese President Xi Jinping on the sidelines of the G-20 Summit in Japan in June.“I promised that, for at least the time being, we’re not going to be lifting tariffs on China. We won’t be adding an additional tremendous amount of — we have, I guess, $350 billion left, which could be taxed or it could be tariffed. And we’re not doing that. We’re going to work with China on where we left off, to see if we can make a deal,” Trump said at the conclusion of the G-20 Summit in June.But with Thursday’s surprise announcement, the president is breaking with that pledge even as he expressed hope that talks would continue.“We look forward to continuing our positive dialogue with China on a comprehensive Trade Deal,” the president said in a tweet.It remains to be seen how China will react to the president’s announcement.The president’s action comes just a day after trade negotiators returned from China from trade negotiations that failed to produce a breakthrough but that the White House described just Wednesday as “constructive” and said talks would continue Washington in September.Earlier this week, President Trump accused China of dragging its heels in trade negotiations in hopes that a different president would be elected.”Well, I think the biggest problem to a trade deal is China would love to wait and just hope — they hope it’s not going to happen,” Trump said. “I hope. But they would just love if I got defeated so they could deal with somebody like Elizabeth Warren or Sleepy Joe Biden or any of these people because then they’d be allowed and able to continue to rip off our country like they’ve been doing for the last 30 years.””I think if China had their wish, they’d wait till after the election,” he later added.

‘Ted Lasso’? ‘WandaVision’? ‘Mare of Easttown’? Who will clean up on Sunday’s Emmy night?
These vaccine mandates are already in place to attend school in the US
COVID-19 live updates: US reports highest daily death toll in nearly 7 months
Derek Chauvin pleads not guilty in 2017 excessive force case involving 14-year-old Black boy
Apprehensions at the southern border surpass 200,000 in August
Democratic drama as House advances Biden’s agenda: What’s in the draft reconciliation bill?