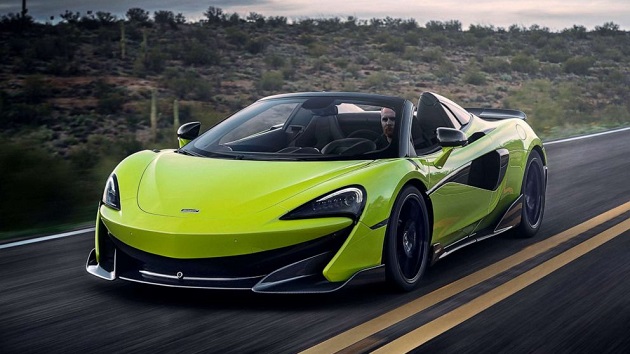 (NEW YORK) — Jo Lewis never planned on working in the automotive industry. Now she’s in charge of designing some of the most expensive — and beautiful — supercars on the planet.”I got into the industry accidentally,” she told ABC News.Hired away from Lotus to work for competitor McLaren in 2016, Lewis oversees the exterior and interior production of every McLaren model, from the sports series to the ultimate series.”I am responsible for everything that you touch and feel,” she said. “The paint, wheel finish, stitching, trims, switches, carpet, ambient lighting, badging, calipers, headlamps.”She supervises a team of 10 — half men, half women — as the head of McLaren’s colors and material design department. She was the first employee on the team.”When I joined McLaren, it wasn’t really a department,” she said. “We were a young manufacturing company generating new ideas.”Her goal at McLaren: to push the boundaries of existing materials and create new leathers, metals, paints and fabrics that are functional, innovative, bold and arresting. She also spends hours meeting with clients to review their bespoke specifications, offering her expert — and honest — opinion.”In general, our customers appreciate what we do and take our suggestions,” she noted. “They seem to have an appreciation for what we have already created.”The perfect example is the Speedtail. The futuristic McLaren, of which only 106 were made, needed to stand out from the other cars McLaren hand-builds at its headquarters in Woking, England.She transformed carbon fiber, the lightweight material that allows supercars to reach insane speeds, into “jewelry.” Tiny layers of carbon fiber were laid flat, formed and milled to “create a specific look” for the badging, she explained. The result resembled a veneer or waterfall, and it added a layer of sophistication to the $2.25 million hypercar.”The Speedtail deserved special material,” she said. “Jewelry can highlight an area or bring bling to a car. Carbon is super structural, strong and light, but you can create different ways of using carbon that becomes elements of jewelry inside and out. I take carbon fiber and make it more elegant, like a tailored suit.”She added, “Everyone is looking for the next version of carbon fiber.”The cutting-edge material is one of many Lewis incorporates into the six-figure supercars.”Each car has its own character,” she said. “I look at the car holistically. Bringing functionality into the materials is important. It has to not just look good — it needs to have function and be innovative.”Lewis said she’s constantly conducting research as part of the design process. But, she emphasized, McLaren forges its own path.Another challenge for Lewis was overcoming the “arts and craft” stereotype that followed her burgeoning career in automotive.”Colors and materials is generally a female role,” she said, “but what we do is different than just picking a color for a car. I do feel like when you talk about colors and materials, it can sound quite superficial or trivial — maybe even an afterthought. I am showing the value of colors and materials to a product. I see myself as a materials engineer.”Copyright © 2019, ABC Radio. All rights reserved.