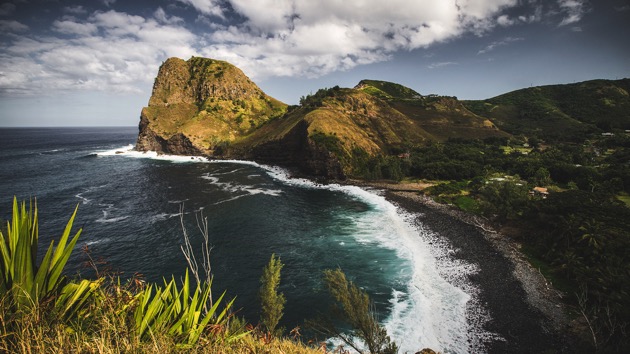 (MAUI COUNTY, Hawaii) — A Kentucky woman died after falling from a cliff in “a very dangerous” hiking area on the island of Maui in Hawaii, authorities said on Tuesday.The woman plunged about 45 feet to her death last week while climbing along what locals refer to as Chutes and Ladders, a steep cliff located on the northwestern portion of the island, according to the Maui County Fire Department.”She was a 37-year-old female visiting from Kentucky. She fell approximately 45 feet down the cliff or trying to climb back up from the shoreline,” Val Martin, assistant chief of the Maui County Fire Department, told ABC News on Tuesday. “Locals have put a big rope there for people to climb and stuff, but you literally have to hold on for your life to climb that thing.””It’s a very dangerous area. We’ve had multiple incidents there,” he added.Emergency workers responded to a 911 call at around 11:30 a.m. last Thursday and found the victim unresponsive at the bottom of the cliff near the shoreline, according to the department. Bystanders and later emergency crews attempted CPR, but she was pronounced dead at the scene.The department declined to share her name but the woman’s family identified her on Facebook as Jamie Nicole Baker, a physical therapist from Louisville, Ky. Her husband, 35-year-old Lonnie Joshua Baker, died in June 2017 and her family says she was on the island as a part of a healing trip.She leaves behind a 3-year-old daughter.”I cant believe you’re gone. I wish I could’ve told you that I love you one more time,” her brother, Michael Redmon, said in a Facebook post. “I wish I could’ve told that I was sorry for not talking to you more, that I was sorry for our differences and arguments. I love you sis, I never stopped loving you. I will miss you.””My phone rang at 4:40am today. Without thinking I picked it up expecting to hear your voice…. I miss you and our early morning chats when you couldn’t sleep,” a Facebook friend, Megan McNamara, wrote in another post.Witnesses said the victim fell while climbing up the cliff via rope, but emergency workers said it’s unclear if she was going up or coming down.There’s no way to know for sure how she may have fell, but Martin said it’s possible that her hands could’ve gotten moist or she may have slipped.He offered his condolences to the woman’s family and said he hopes her story serves as a cautionary tale for other adventurists.”We want people to avoid the area and enjoy it from a distance. It’s very dangerous activity. It’s a steep cliff that leads straight down to the shoreline,” Martin said. “I think a lot of people might over estimate their physical capabilities until it’s too late and they’re the middle of it.”Copyright © 2019, ABC Radio. All rights reserved.