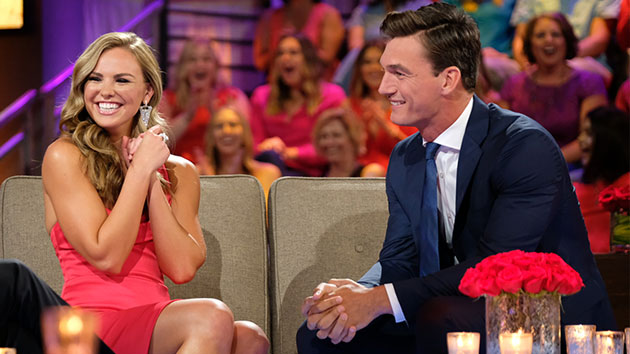 (NEW YORK) — Host Chris Harrison closed out Monday’s part one of the season 15 Bachelorette finale by promising “The most shocking finale in Bachelorette history.  And Tuesday night’s part two episode certainly delivered on that promise as Hannah Brown’s wild ride got even crazier.

The episode began with the two remaining suitors, Jed and Tyler C. picking out engagement rings in anticipation of proposing to Hannah, who was just as nervous about which man will have that honor.

Tyler got first crack, but his proposal was abruptly interrupted by Hannah. “You have supported me, you have been so sweet and strong for me and done everything I’ve asked and more, and loved me so much,” Hannah began.  “And my life with you would be amazing. And when I told you I was falling in love with you, I mean[t] it.”

But then, Hannah declared, “I love someone else.”

Tyler put on a brave face, telling Hannah, “It’s going to hurt, but I’m still going to be your biggest fan rooting for you. I wish you and Jed nothing but success, I really mean that.”

Afterward, Tyler, addressing the camera, said not being chosen felt like “a million punches to the gut,” adding “I’m hurt. I thought it was going to be Hannah, but that’s not the case.”

Next, Jed showed up with his guitar. His proposal included a song about “time standing still,” after which he got down on one knee and asked Hannah to marry him. She, of course, said yes.

Their happiness, however, was short lived.

Hannah told host Chris Harrison during the live portion of the show that she suspected Jed was hiding something when, the very next day, he warned her about “a girl he was hanging out with.” Her suspicions were confirmed by the publication back in June of the now infamous People magazine article in which Jed’s ex, fellow Nashville-based musician Haley Stevens, claimed she and Jed “spent the night together the night before he headed to L.A.” to be on The Bachelorette.

What followed Tuesday night was a long, awkward conversation during which Jed tried his best to explain the situation to Hannah and convince her that his feelings for her are real.  But not surprisingly, Hannah felt “betrayed.”

The sit-down ended with Hannah removing Jed’s engagement ring and placing it on the table in front of them.

Back to the live studio, Hannah confirmed, “I am not with Jed anymore,” eliciting cheers from the studio audience.

In stark contrast, Jed joined them on stage — and was greeted with complete silence. He tried once again to convince Hannah to give him another chance, but her mind was made up: the relationship is over.

But just when we thought there were no surprises left, Tyler stepped onto the stage for a chat with Hannah and Chris. After explaining that she was really confident with who she is now and very comfortable on her own, Hannah turned to Tyler and declared, “You’re an incredible guy — and I’m a single girl.”

Hannah and Tyler then agreed to start dating again, but promised that this time, they’d “be normal people and just see and hang out.”

Unlike past The Bachelorette finales, a premiere date for the 24th season of The Bachelor — or indeed, who the new bachelor will be — weren’t announced.  To tide you over in the meantime, a new season of Bachelor in Paradise kicks off next Monday at 8 p.m. ET on ABC.

Trump return to White House ‘would be a disaster’ for US intelligence: Former DHS whistleblower
Pfizer CEO says it’s possible to distribute both boosters and primary doses
The push for electric vehicles may be killing sedans for good: Experts
Culture thrives in America’s most Hispanic, Latino state: New Mexico
US enters deferred prosecution agreement with detained Huawei executive Weng Manzhou
Harris interview with ‘The View’ delayed after co-hosts test positive for COVID-19