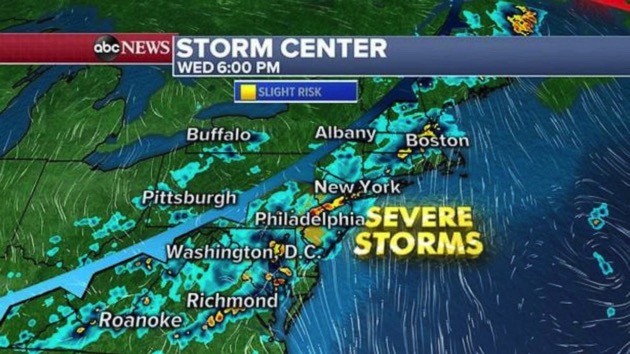 (NEW YORK) — There were more than 100 reports of severe weather on Tuesday, including a lightning strike in Florida that injured at least six people.Heat advisories remain in effect for parts of Rhode Island and Massachusetts, including Boston, which could see a heat index of 100 degrees Wednesday.A cold front should move through cities along Interstate 95 on Wednesday, ending the heat but sparking severe thunderstorms. There’s a slight risk of severe weather from Washington to New York City, with damaging wind gusts possible. Thunderstorms likely will be greater in number closer to evening rush hour.Higher humidity levels should result in frequent lightning as the storms could deliver a lot of rain over a short time period. A flash flood watch has been issued for parts of the Philadelphia metro region, where 4 inches of rain could fall.Hurricane Erick, one of three tropical systems lined up in the Pacific Ocean, likely will miss Hawaii.Erick, now a Category 3 with 125 mph winds but beginning to weaken, is heading west at 12 mph. It was about 700 miles east-southeast of Hawaii early Wednesday. By the time it passes Hawaii, it’s likely to have weakened to a tropical storm, which could send swells toward the islands but not have a major impact.Hurricane Flossie, a Category 1 hurricane with winds of about 80 mph, was about 2,000 miles east-southeast of Hawaii early Wednesday. It’s tracking toward Hawaii, but despite some minor strengthening over the next few days, by heading into relatively cooler water it should lose intensity the closer it gets to the islands.Forecasters are monitoring two spots in the Atlantic Basin for tropical development.One area of thunderstorms moving off the coast of Africa has a 40 percent chance of development over the next five days.Meanwhile, a cluster of thunderstorms near the Dominican Republic continues to show a lack of organization and is unlikely to organize into a meaningful system. Either way, it should send tropical moisture toward the southeastern U.S. later this week.