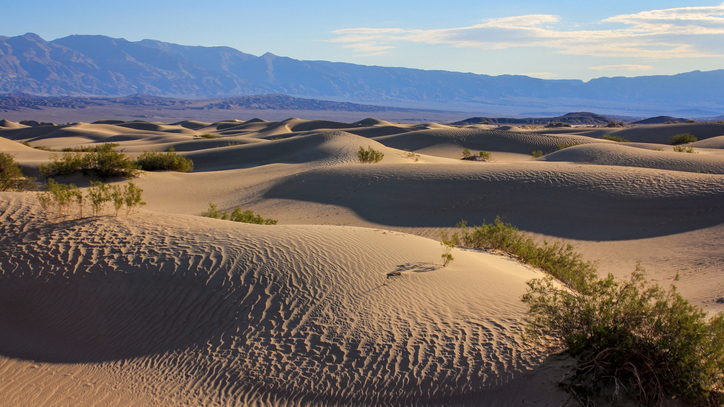 (DEATH VALLEY, Calif.) — A U.S. Navy single seater F/A-18E fighter jet has crashed in Death Valley, California, according to the Navy. There are reports that visitors at the park have suffered minor injuries, a spokesperson for Death Valley National Park said.Commander Ron Flanders, a spokesman for U.S. Naval Air Forces, confirmed to ABC News that the aircraft had crashed near Naval Air Weapons Station China Lake at approximately 10 a.m. PT.Flanders said the status of the pilot was unknown and that a search and rescue helicopter from China Lake, located in Ridgecrest, was en route to the crash area.Patrick Taylor, a spokesperson for Death Valley National Park, said the park received a report around 10 a.m. PT from the Panamint Springs Resort that a military plane had crashed on the west side of Death Valley near Father Crowley Overlook in an area known as Star Wars Canyon.The area has been used for military training flights since the 1930s, Taylor said, and regularly attracts tourists who want to get a glimpse of military pilots in action weaving through the narrow canyon in maneuvers reminiscent of the Star Wars movie. There are reports of visitors at the site with minor injuries due to the crash.The Father Crowley Overlook has been temporarily closed. Emergency responders from the park, military, and Inyo County have been dispatched to the scene.

Trump return to White House ‘would be a disaster’ for US intelligence: Former DHS whistleblower
Pfizer CEO says it’s possible to distribute both boosters and primary doses
The push for electric vehicles may be killing sedans for good: Experts
Iowa Republican Sen. Chuck Grassley, 88, running for reelection
Harris interview with ‘The View’ delayed after co-hosts test positive for COVID-19
Generational wealth implications: Black and Latino-owned homes are more likely to be undervalued