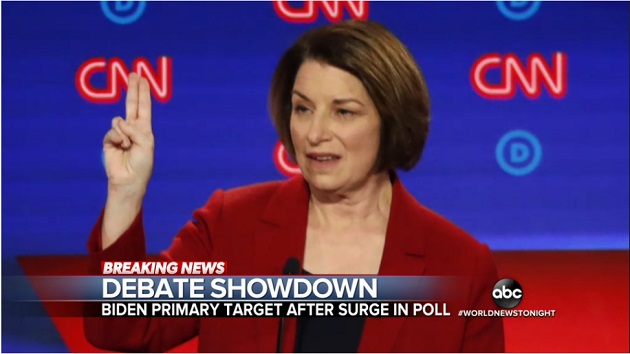 (DETROIT) — In a debate that saw two of the most progressive 2020 candidates, Sens. Elizabeth Warren and Bernie Sanders, face off against more moderate rivals, 10 Democrats on Tuesday debated how to ensure that more Americans have health care coverage and whether the party should embrace boldness or pragmatism to oust President Donald Trump.Here are three of the buzziest moments of the night:’I wrote the damn bill!’As Sanders defended his government-run health care plan, others on the debate stage called it bad politics — and flawed math.Asked if Sanders could guarantee union members “Medicare For All” benefits would be as good as their current benefits, Sanders said they would be better because the benefits would be “comprehensive.””You don’t know that, Bernie,” chided Ohio Rep. Tim Ryan.”I do know it,” Sanders replied. “I wrote the damn bill!”The fiery remark elicited massive applause. Before the debate had ended, Sanders’ campaign was encouraging supporters to buy “I wrote the damn bill” stickers that featured the candidate speaking into a megaphone.Why do they run?Warren took every opportunity to criticize the “corrupt, rigged” political system and flaunt her campaign’s ambitious policy proposals.Former Maryland Rep. John Delaney said that candidates like Warren and Sanders are offering “free everything” and “fairy tale economics” that will block the path to the White House.In one of the night’s more viral moments, Warren shot back: “I don’t understand why anybody goes to all the trouble of running for the president of the United States to talk about what we really can’t do and shouldn’t fight for.”‘This dark psychic force’For all the sparring, the candidates took pains to behave respectfully toward one another.But they didn’t hold back in talking about Trump.Minnesota Senator Amy Klobuchar called him a “racist.” Sanders called him “a racist and a sexist and a homophobe.” And Warren said he “disgraces the office of president every single day.”But Marianne Williamson, the author of 13 self-help books who has used her presidential bid to call for a “moral and spiritual awakening” in America, had perhaps the most memorable phrase when she talked about “this dark psychic force of the collectivized hatred that this president is bringing up in this country.”Copyright © 2019, ABC Radio. All rights reserved.

House Democrats remove money for Israel’s Iron Dome system in funding bill
Democrats introduce post-Trump ethics bill to enforce subpoenas, limit conflicts
Democrats dare GOP to vote against government funding bill
Elizabeth Holmes criminal trial dominated by allegations of deception and intimidation from those who worked for her
Those suffering from sickle cell disease may finally be getting some relief as experts work on cure
Traveling over the holidays? Here’s how to stay safe from COVID-19