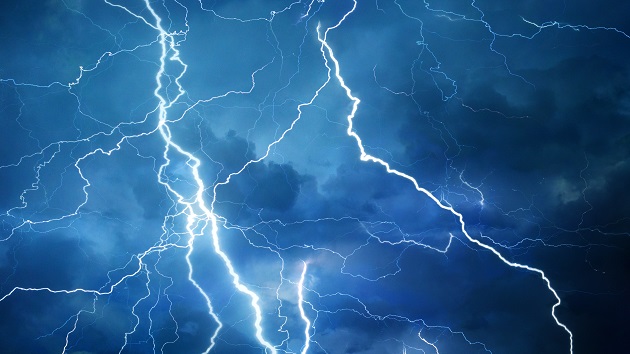 (PALM BEACH, Fla.) — Six people were injured on Tuesday afternoon when lightning struck a roof in South Florida, authorities said.The bolt hit a roof that several workers were repairing at a residential development in Wellington, a village some 16 miles west of West Palm Beach in central Palm Beach County.A total of six people were evaluated by paramedics, Palm Beach County Fire Rescue said in a statement. Two people were transported to a nearby trauma center with significant injuries, while two were taken to a local hospital for non-traumatic injuries and two others were treated on scene.Ali Vals, a resident in the development, said she saw a woman fall off the roof of a two-story building after the lightning struck.”She was unconscious and everything was like burned,” Vals told ABC Miami affiliate WPLG.Esteban Rubio, who was one of the workers standing on the roof at the time, said he’s never seen anything like it.”It is scary,” Rubio told WPLG. “In one second, your life is over.”Copyright © 2019, ABC Radio. All rights reserved.