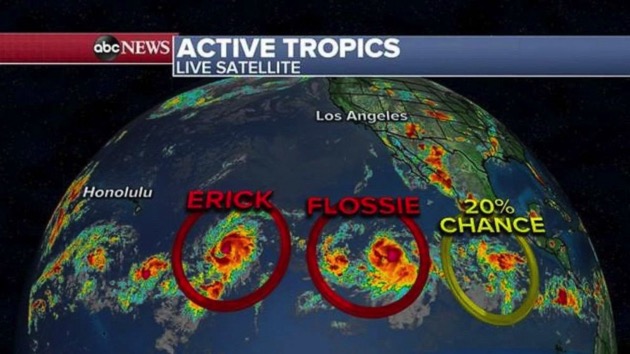 (NEW YORK) — The Pacific Basin is seeing active tropical development, with two storms being joined by a additional weather system that could become the third.Tropical Storm Erick became a hurricane overnight, with winds reaching 80 mph. It’s moving west at about 17 mph as a Category 1.Erick is forecast to travel west-northwest over the next few days and slide just south of Hawaii. Erick likely will strengthen a bit more on Tuesday before weakening as it gets closer to Hawaii.Tropical Storm Flossie, with winds of 65 mph, is heading west at about 16 mph. It’s expected to become a hurricane later today and perhaps a major hurricane by Wednesday.Similar to Erick, it’s traveling west-northwest toward Hawaii and expected to weaken before approaching the islands. It’s too early to tell if the storm will affect Hawaii.Meanwhile, in the Atlantic Basin, two different spots are being monitored for tropical developments, each of which appears unlikely to form at this time. It’s possible some of this storm action could send extra moisture to the Southeast later in the week.In the Northeast, another hot day is expected on Tuesday, with heat advisories expanded to include New York City and Albany, in addition to Boston and Hartford, which saw them on Monday.Parts of the Northeast could experience heat indices in the high 90s — about 5 to 10 degrees above normal.A cold front on Wednesday is expected to move toward the East Coast, leading to some scattered thunderstorms, especially in the Northeast. Storms could deliver heavy rain locally and lead to flash flooding.Copyright © 2019, ABC Radio. All rights reserved.