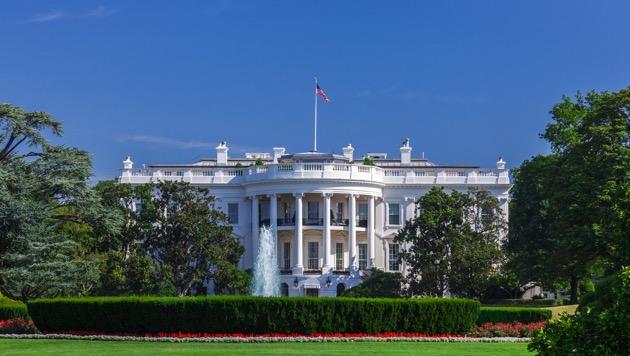 (WASHINGTON) —  President Donald Trump defended his ongoing attacks against Maryland Democratic Congressman Elijah Cummings, the city of Baltimore and New York Rev. Al Sharpton on Tuesday in claiming that he considers himself the “least racist” person in the world.Before departing the White House, the president fielded his first questions from the press about his attacks on Cummings and accusations from opponents that he is a racist. Trump said that the people of Baltimore are “living in hell” and claimed that African Americans have been calling the White House to thank him to for bringing critical attention to the city. Over the weekend, the president tweeted that Baltimore is a “disgusting, rat and rodent infested mess.””We have a large African-American population, and they really appreciate what I’m doing and they’ve let me know it,” Trump told reporters. “They really appreciate it,”Trump went on to say that he doesn’t think that his war of words with Cummings, Sharpton and the city of Baltimore hurts him politically, nor does he consider his comments as being rooted in racism.”I’m the least racist person there is anywhere in the world,” Trump said, “Al Sharpton — now he’s a racist.”On Monday, the president turned from his tweets criticizing Cummings to Sharpton, whom he characterized on Twitter as a “con man” who “Hates Whites & Cops.”held a press conference in Baltimore, alongside former Republican National Committee Chairman Michael Steele, to denounce the president’s behavior. Trump lashed out.At the press conference Monday, Sharpton said Trump was lobbing attacks in the “most bigoted and racist way.” Steele urged Trump to visit Baltimore.”This is a place where people raise families, kids go to school, businesses thrive, strive and struggle,” Steele said. “Mr. President, come on down. The streets are ready for you. Neighborhoods are ready for you. So just show up. Walk down the street. Show up. It’s not complicated.”Famous Americans who hail from Baltimore include F. Scott Fitzgerald, W.E.B. DuBois, Frederick Douglass, Babe Ruth, Gertrude Stein, musicians Frank Zappa and Tupac Shakur, late Supreme Court Justice Thurgood Marshall, writer H.L. Mencken and Francis Scott Key, author of the “The Star-Spangled Banner.”In the wake of his tweets, Trump has drawn criticism from lawmakers on the left and the right. Republican Governor of Maryland Larry Hogan called the attacks “outrageous and inappropriate,” and even Rep. Mark Meadows — one of Trump’s closest allies on Capitol Hill and a friend of Cummings — tried to cool tempers by declaring that neither man is a racist.”Both love America,” Meadows said of Trump and Cummings. “I think, if we put aside partisanship with investigations, we can find bipartisan solutions that will benefit not only Chairman Cummings’ district but the country as a whole. I’m committed to working to that end with both of them.”Trump said Cummings, chair of the House Oversight Committee — which has been investigating his administration, including Trump’s family — to Baltimore instead to look into the president’s unsubstantiated claims that Baltimore has “wasted billions” of dollars.”They ought to take that beautiful waste of an Oversight Committee, go down to Baltimore and other Democratic-run cities and take a look, see if you can find the billions that have been stolen,” Trump said. ABC News asked the White House for comment.Trump, who has not visited Baltimore as president, said he will visit the city at the “right time.”Copyright © 2019, ABC Radio. All rights reserved.

What is Title 42? Amid backlash, Biden administration defends use of Trump-era order to expel migrants
Trump return to White House ‘would be a disaster’ for US intelligence: Former DHS whistleblower
Pfizer CEO says it’s possible to distribute both boosters and primary doses
Generational wealth implications: Black and Latino-owned homes are more likely to be undervalued
‘The View’ hosts leave mid-show due to testing positive for COVID-19, miss Vice President Harris interview
COVID-19 live updates: CDC endorses Pfizer boosters for older and high-risk Americans