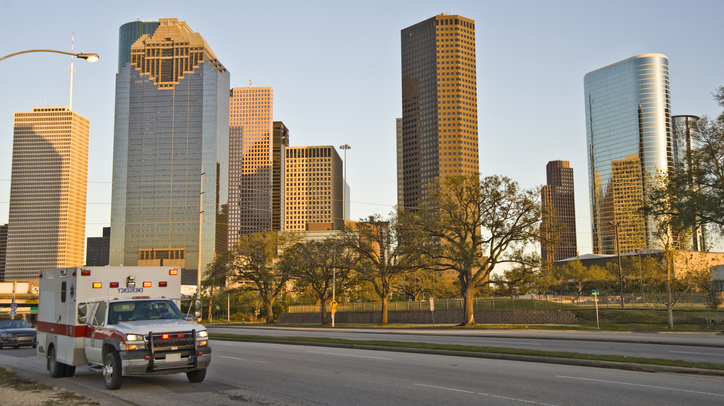 (HOUSTON) — At least eight construction workers working on an eight-story hotel in Houston were sent plummeting to the floor below after part of the roof collapsed, fire officials said.Three workers needed to be taken to the hospital for their injuries.Workers had just poured fresh concrete at the hotel on Monday morning, which was under construction at North Main and Interstate 45, when part of the top floor began to crumble and sent some falling to the seventh floor below, Deputy Fire Chief Richard Galvan said.”It’s probably going to be some kind of extrication,” a first responder could be heard saying, according to dispatch audio from broadcastify.com.At the time, 15 workers were on the hotel’s roof, Galvan said.He said injuries included a broken wrist and dislocated shoulder.Firefighters were forced to use their ladders to reach the most seriously hurt. Two construction workers had to be removed using the firefighters’ ladder basket from the fifth floor to waiting ambulances on the ground.Afterward, first responders could be seen assessing the damage, stepping gingerly through the still-fresh concrete as construction trucks on the street continued churning.Galvan said that construction workers would not be allowed back on the site until officials deemed it safe.”After a collapse, it’s always going to be unsafe until they come in and do an inspection to make sure it’s safe, structurally safe to go back in. … Nobody’s going to be able to go back in until they deem it necessary.”Roads around the construction site were reopened to traffic about an hour after the incident and none of the workers’ injuries were life-threatening, according to ABC Houston station KTRK-TV.