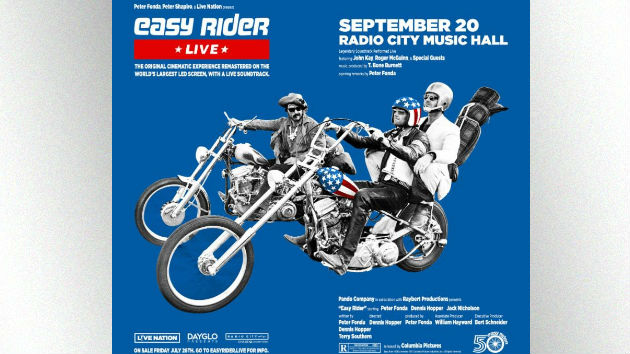 (NEW YORK) — The counterculture classic Easy Rider is about to turn 50, and it’s getting a star-studded screening at New York City’s Radio City Music Hall to celebrate.

The event will feature the movie’s soundtrack played live, synced with a newly restored version of the film, with McGuinn and Kay performing songs either by them or their bands which were featured in the movie. Those include Roger’s “The Ballad of Easy Rider,” The Byrds’ “Wasn’t Born to Follow,” and Steppenwolf’s “Born to Be Wild” and “The Pusher.”

The soundtrack also included songs by The Band and The Jimi Hendrix Experience. Renowned producer T-Bone Burnett will direct a group of musicians that will serve as the event’s house band.

Tickets go on sale to the general public this Friday, August 2, at 12 p.m. ET. A pre-sale will be available via Ticketmaster.com starting Thursday, August 1, at 10 a.m. ET.

Easy Rider, which also starred Dennis Hopper and Jack Nicholson, focuses on a pair of motorcycle-riding drifters who take a road trip from California to New Orleans after making a lucrative drug deal. The edgy movie, which was directed and co-written by Hopper, incorporated then-topical themes, like the divide between conservative America and hippies, communal living and the drug culture.

“Without any score during the dialogue scenes, we have a unique opportunity to marry a live band to film in a way that no other cinematic work could provide,” notes the screening’s producer, Live Nation executive Jason Miller.