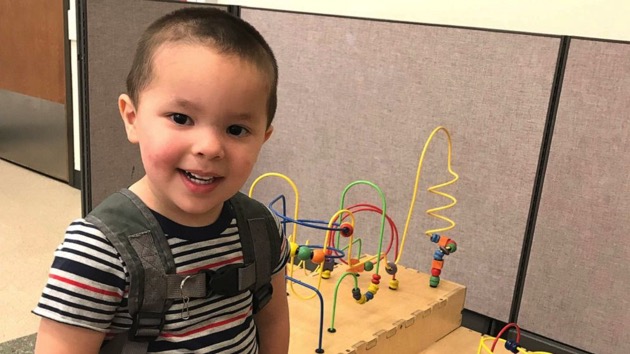 (MEDFORD, Ore.) — A body found in Montana is believed to be a 2-year-old Oregon boy who had been missing after his parents’ apparent murder-suicide, authorities said.The body, believed to be Aiden Salcido, was discovered in a remote area of Montana, officials with the Medford, Ore., police said on Sunday.While he has not yet been identified, the boy was found in the same area where Aiden’s parents, Hannah Janiak and Daniel Salcido, were spotted days earlier, police said.The boy’s cause and manner of death will not be disclosed until an autopsy is completed, police added.Authorities had been searching for Aiden since Daniel Salcido allegedly fatally shot Janiak in the head and then fatally shot himself in Montana on Wednesday, Oregon FBI officials said.The apparent murder-suicide unfolded after Aiden’s father allegedly led police on a car chase, according to the FBI. Salcido and Janiak’s bodies were found in the car.Aiden’s parents had been reported missing to the Medford Police Department on June 11, according to the FBI. Janiak and Salcido had been convicted in a burglary and Janiak was expected to begin serving her sentence that same day, but she did not show up, according to the FBI.”The Medford Police Department would like to express condolences to our local families of those involved and we appreciate the cooperation that we received,” Medford police officials said in a statement on Sunday. “Detectives from our agency will be returning to Medford and authorities in Montana will continue to lead the investigation.”Copyright © 2019, ABC Radio. All rights reserved.