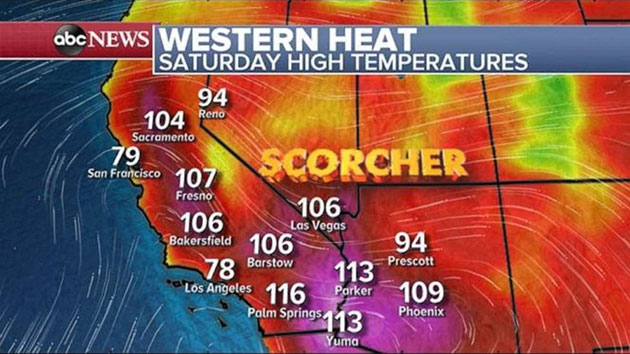 (FRESNO, Calif.) — Some of hottest weather of the summer is expected this weekend in the western U.S. — at times reaching near-dangerous levels. There are heat advisories and excessive heat watches out for a large portion of California this weekend.In the San Francisco metropolitan area, inland temperatures could top the triple-digits this weekend, about 10 to 15 degrees above average. Further inland, near Sacramento, temperatures could reach as high as 109 degrees, especially on Sunday. In Los Angeles , Inland areas could cross 105 degrees.The heat will slide east over the next couple days, peaking in central and northern California on Sunday. Redding and Fresno could approach 110 degrees. The heat will peak in the desert on Monday, with temperatures in Las Vegas and Phoenix hitting, or even exceeding, 110 degrees.Monsoon storms brought heavy rain to parts of the mountain west on Friday. A mudslide was reported on Interstate 70 in Colorado, with more showers and thunderstorms expected in parts of the region this weekend. The threat for monsoon moisture will decrease in the near term, but it could repeat next week, especially in parts of the desert southwest, like Phoenix and Las Vegas.There is a risk for wildfires in parts of the West on Saturday from Oregon to Montana. There are fire weather alerts in parts of Washington and Montana due to an approaching cold front that should bring gusty winds.The gusty winds along with dry weather in the region could lead to rapid wildfire spread. Additionally, there could be a couple of dry thunderstorms that bring lightning and a further threat for wildfires.High pressure is keeping a large part of the central and eastern U.S. quiet this weekend, but the heat will increase gradually. Temperatures in the 90s are expected in parts of the Northeast early next week, however, this appears to be rather short-lived and less impressive than what the region experienced about a week ago.Copyright © 2019, ABC Radio. All rights reserved.