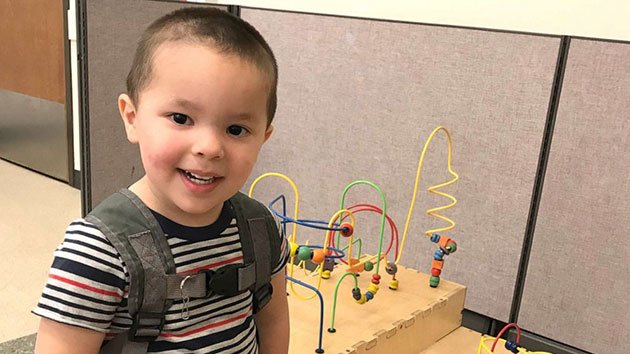 (MEDFORD, Ore.) — Authorities are searching for a 2-year-old Oregon boy who is missing after his parents were found dead in a vehicle in an apparent murder-suicide, authorities said.Aiden Salcido was not with his parents, Daniel Salcido and Hannah Janiak, when they were found dead this week in Montana, according to a press release from the FBI on Friday night. Daniel Salcido, 21, was found with an “apparent self-inflicted gunshot wound to the head,” while 24-year-old Janiak was believed to have been shot in the head.“Investigators are greatly concerned for Aiden’s welfare and are asking for the public’s help in locating him safely and expeditiously,” the press release said.Salcido and Janiak were wanted by authorities after they were convicted in a burglary case, according to the FBI. The two were reported missing on June 11 after Janiak failed to show up at the Jackson County Jail, located in Medford, Oregon, to begin her sentence in that case.Felony warrants were subsequently issued for both.In searching for the two, investigators discovered that the last activity for Janiak’s financial records was made on June 3 and 4. Janiak, Salcido, and Aiden were all caught on surveillance footage together making the purchases at a Walmart in Medford.Nearly two months later, on Wednesday, officers in Montana stopped a car with an Oregon license plate, the FBI said. The passengers were discovered to be Salcido and Janiak, but the two fled before an arrest could be made.Officers pursued the couple and were able to spike their tires, forcing the vehicle to come to a stop.When the officers approached, both Salido and Janiak were found dead.The family of the couple, who was not married, said the three were homeless and would camp in Medford, according to authorities. Family members also described Janiak as a good mother who suffered from mental health issues.Medford police and the FBI are now searching for Aiden and asking for the public’s help in identifying where they may have been camping.Mike Budreau, the spokesman for Medford police, told ABC News Saturday that detectives have received multiple tips that they’re following up on.Anyone with information on his whereabouts or information on where the family had been staying during the time they were reported missing is asked to contact Medford police at (541) 774-2258.Copyright © 2019, ABC Radio. All rights reserved.