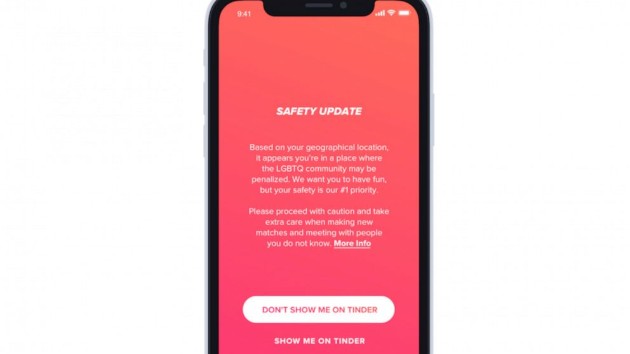 (NEW YORK) — Tinder is rolling out a feature this week to protect LGBTQ users in countries that outlaw homosexuality or otherwise discriminate against the LGBTQ community. “While there are still efforts to protect our freedoms from LGBTQ discrimination here in U.S., it’s important to remember that there are still nearly 70 countries around the world that have laws effectively criminalizing LGBTQ status,” the company wrote in a press release on Wednesday. “We’re rolling out a Traveler Alert that will appear when Tinder is opened in one of these locations to ensure that our users are aware of the potential dangers the LGBTQ community faces — so that they can take extra caution and do not unknowingly place themselves in danger for simply being themselves,” the company said.Tinder started rolling out the new feature across Android and iOS platforms on Wednesday.With the new “Traveler Alert,” users who identify as LGBTQ will no longer automatically appear on Tinder when they open the app in countries with anti-gay laws. Once activated, these users can choose to remain hidden in these places or make their profile public.Upon arrival, users will get an alert which says: “Based on your geographical location, it appears you’re in a place where the LGBTQ community may be penalized. We want you to have fun, but your safety is our #1 priority. Please proceed with caution and take extra care when making new matches and meeting with people you do not know.”If a Tinder user who has added sexual orientation or gender identity to their profile chooses to be public, those profile details won’t be displayed until they leave the country. Copyright © 2019, ABC Radio. All rights reserved.