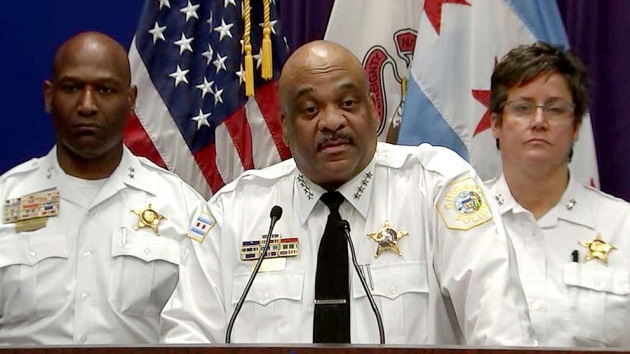 (CHICAGO) — Three Chicago girls were arrested on suspicion of being part of a teen mob that brutally beat a special needs girl in what police described as a “beyond disturbing” attack that was video recorded and posted on social media.The 15-year-old victim, who has a mental disability and had been reported missing by her father, thought the alleged attackers — ages 13, 14 and 15 — were her friends, Chicago police said during a news conference on Thursday.”The case that we’re speaking of galvanized our attention around behavior that quite frankly we all wish never existed, not just in this city but in this country,” said Chicago Police Commissioner Eddie Johnson.Johnson said that two of the juvenile suspects were arrested Wednesday and charged with felony aggravated assault, and the third was arrested on a charge of mob action. Their names were not released because they are minors.”I’ve got to tell you, it broke my heart to see this group of young people turn on her and escalated into what we saw — a physical assault,” Johnson said.The victim was reported missing on July 18 by her father, according to Lt. Ozzie Valdez, who headed the investigation.Valdez said that while detectives were investigating the girl’s disappearance, the video of her being viciously beaten surfaced Monday on social media and quickly went viral. Police were notified of the video by community activists and the local media.He said the attack apparently occurred on Monday and was captured on cellphone video by a juvenile who was part of the group but apparently didn’t participate in the assault.

3 girls arrested after attack on girl with special needs in Chicago: https://t.co/9S7CVKkJpp pic.twitter.com/xttKARaIiZ

“If you’re dumb enough to post a crime on social media then that shows where your head is,” Johnson said.The footage, obtained by ABC station WLS-TV in Chicago, shows the victim standing against what appeared to be an outdoor utility box and being surrounded by at least five young people who punched her repeatedly in the head and back as she defensively turned her back to the attackers before she fell to the ground. The person who apparently recorded the video is heard laughing as the victim screamed for help.”This is beyond disturbing to watch and this young girl deserves better,” Anthony Guglielmi, spokesman for the Chicago Police Department, wrote in a Twitter post on Thursday.Valdez said the victim was found on Wednesday aboard a Chicago Transportation Authority train when a citizen recognized her from the video.The victim, whose name was not released, was taken to a police station and then to Comer Children’s Hospital Chicago, where she was treated for undisclosed injuries and released.”In their interviews, the detectives learned that the victim met several juveniles who she thought were her friends. These girls then taught her how to flash gang signs and as this was occurring a beating began which was captured on video,” Valdez said.He said the investigation is ongoing and did not rule out the possibility of more arrests.Valdez declined to comment on the extent of her injuries.Asked if the victim was sexually assaulted, Johnson said, “In terms of a sexual aspect, we’re not prepared to talk about that at this time.”Police also did not specify a motive for the attack, but Johnson said, “There were some things going on that these young ladies wanted her to do that she didn’t do. We’ll leave it at that for right now.”Johnson thanked the community for providing tips that helped investigators locate the victim and arrest the suspects, who appeared Thursday in juvenile court.”Some of the parents of the offenders and the offenders themselves also did the right thing and brought information and individuals forward to the police,” Johnson said.He added that he hopes the alleged incident becomes a “teaching moment” for the young girls charged in the attack, saying, “hate, bullying, and bigotry are cancers on our society that do nothing but break and divide us.”He called the attack an “affront to who we are as Chicagoans.””It stands in direct conflict to the ‘City of Broad Shoulders,"” Johnson said. “We all have to work together to help ensure that this type of behavior is rooted out of our communities and our city.”

Hostess assaulted at NYC restaurant after asking Texas patrons for proof of COVID-19 vaccination
‘We are prepared’: Law enforcement stresses readiness ahead of right-wing rally
McAuliffe, Youngkin spar over vision for commonwealth in first Va. gubernatorial debate
Statue of Bitcoin founder honors mysterious ‘god’ of cryptocurrency
COVID-19 live updates: More than 10,000 new deaths reported in US in one week
Tyra Banks defends Olivia Jade ahead of her ‘Dancing with the Stars’ debut: “Olivia is so brave”