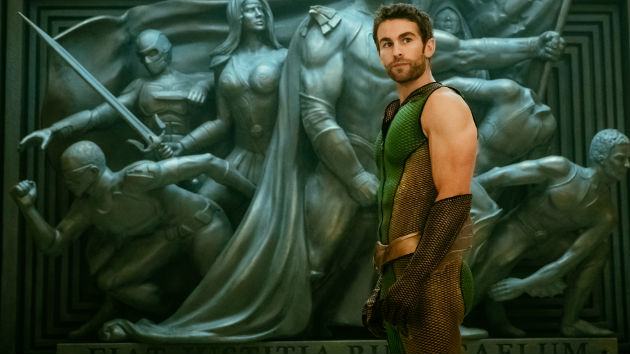 (NEW YORK) —  Amazon Studio’s new series The Boys is now available for streaming. Based on Garth Ennis’ bestselling graphic novel series of the same name, the show turns the superhero genre on its head.

In The Boys, super-powered people are real, and they’re real jerks — particularly a Justice League-like group called The Seven.

Chace Crawford plays The Deep, a riff on Aquaman. “The Seven are like the Yankees are the superheroes,” he tells ABC Radio. “You know, there’s like hundreds of thousands in the world [but] they’re sort of like the elites — you know, over-privileged narcissistic as*****. And it was fun playing that!”

Shortly after viewers meet The Deep, who wears a rather revealing Speedo-bottomed costume, we see there’s even more reason to be creeped out by the so-called hero. He’s “kind of narcissistic — he’s thinks he’s like the number two guy, always trying to prove himself — but you know deeply insecure as well and feels like a freak with his gills.”

The Boys takes a huge swipe at the world of celebrity, too: the heroes are pampered, represented by a high powered agency, and worshipped by the “regular people” out there.

Crawford, who audiences might remember from Gossip Girl, tells us he loved the darkly comic tone of the show. “[T]hey always walk around in their suits, even at the supermarket or whatever. Cracks me up. And you know [while] doing like interviews on the red carpet, they’re in movies, you know — it’s a full on like PR campaign for these guys.”

He says the show, which also stars Karl Urban and Elisabeth Shue, “was the most fun I think I’ve ever had working on anything, to be perfectly honest.”

The Boys has already been renewed for a second season.