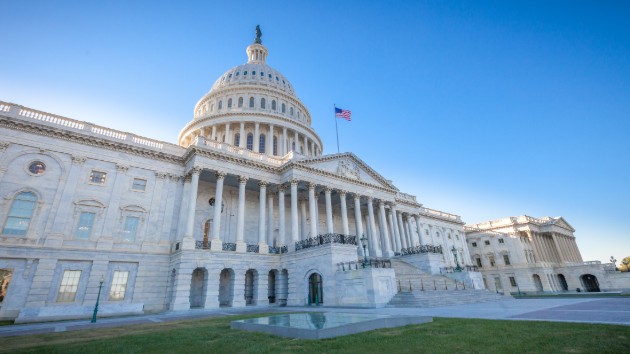 (WASHINGTON) — Senate Republicans say they plan to move ahead with confirmation hearings for Air Force Gen. John Hyten, whose nomination to be the next Vice Chairman of the Joint Chiefs has been complicated by an allegation of sexual misconduct. Military investigators concluded two weeks ago there was insufficient evidence to support finding of misconduct against Hyten, who is currently head of U.S. Strategic Command, after a female service member accused him of making abusive sexual contact in 2017 and 2018, a Pentagon spokesman said.President Donald Trump nominated Hyten in April, but the general’s nomination has languished for months.The nation’s current number two military officer, Gen. Paul Selva, will retire from the position at the end of July, and Republicans hope to confirm his successor soon.Members of the Senate Armed Services Committee met with Hyten behind closed doors for the first time on Thursday.Committee Chairman Jim Inhofe, R-Okla., emerged to say he is moving forward and scheduling a public confirmation hearing before the Senate recesses next week for the month-long August recess. One source said the hearing would take place on Tuesday.Sen. Tammy Duckworth, D-Illinois, said she found Hyten credible, but the senator, a veteran, said she still has questions.“He is a four-star general, and he has served his country well. But there are still a lot of unanswered questions that maybe neither he nor the accused can answer, and that has to do with how he treated this case,” Duckworth said, adding that she also found the accuser to be credible.Sen. Jeanne Shaheen, D-N.H., after the hours-long, closed door session in a secure room of the Capitol, agreed.“I think there are still questions, and there will be an opportunity to continue to ask questions,” the senator said.Cmdr. Bill Clinton, spokesman for Strategic Command, told reporters, “General Hyten thanks Chairman Inhofe and the committee members for this opportunity to share his side of the story.”The Air Force’s Office of Special Investigations (OSI) was tasked with investigating the criminal allegations against Hyten because he is an Air Force officer. The OSI investigators conducted interviews with staffers and reviewed emails but did not find anything more than what the service member had alleged, said the senior military official. The accuser’s lawyer provided additional names and emails, but a further investigation of that new information did not find any substantiating evidence, said the official.Thursday’s session was the third the Armed Services panel has had on the allegations against Hyten. On Monday, the committee met with the accuser in private session, and Air Force investigators have also met with lawmakers behind closed doors to explain their probe and take questions. Copyright © 2019, ABC Radio. All rights reserved.