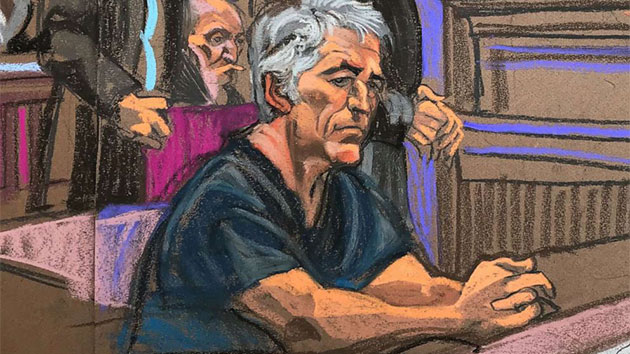 (NEW YORK) — Federal prosecutors in New York overseeing the case against millionaire Jeffrey Epstein are preparing to hand over highly-sensitive investigative material to the financier’s defense attorneys after a federal judge on Friday granted the government’s request to place a protective order on the documents.

Prosecutors sought the order because, they said in court filings, they intends to produce documents and materials that could…”affect the privacy and confidentiality of individuals…[and that] would impede, if prematurely disclosed, the Government’s ongoing investigation of uncharged individuals.”

When Epstein secured a non-prosecution agreement with federal prosecutors in southern Florida in 2008 over a previous investigation, the much-criticized deal also immunized any and all potential co-conspirators, known or unknown, and also included the names of four women who had been suspected by authorities of having facilitated or participated in alleged crimes against children.

The deal, which is currently under review by the Justice Department’s Office of Professional Responsibility, allowed Epstein to plead guilty to two state counts and avoid federal charges for an allegedly broad pattern of similar conduct.

Throughout the negotiations — and for nearly a year after the agreement was signed — the victims were kept in the dark, their attorneys said, claiming they were strung along as government lawyers promised victims they were still investigating even long after they had cut the deal with Epstein.

One of Epstein’s accusers in that investigation, Courtney Wild, identified in court documents as “Jane Doe 1,” sued the Department of Justice in 2008, alleging that the non-prosecution agreement reached with Epstein by federal prosecutors in South Florida was hatched in violation of the Crime Victims’ Rights Act, which enumerates the rights afforded to victims in federal criminal cases, including the right “to reasonable, accurate, and timely notice of any public court proceeding, or any parole proceeding, involving the crime or of any release or escape of the accused.”

In February of this year, U.S. District Court Judge Kenneth Marra ruled in favor of Wild and other Epstein accusers, finding that the federal government failed to confer with the victims in advance of the deal. Marra is now considering the possible remedies for the violation, which could potentially include tearing up the non-prosecutions agreement.

Epstein, 66 — who at one time socialized with former President Bill Clinton, Great Britain’s Prince Andrew, and President Donald Trump — was arrested on July 6 for alleged sex trafficking of minor girls in Florida and New York. Some of the charges date back to the early 2000s.

He was indicted on a child sex trafficking and conspiracy charges in which prosecutors charge that he “sexually exploited and abused dozens of minor girls at his homes in Manhattan, New York, and Palm Beach, Florida, among other locations,” using cash payments to recruit a “vast network of underage victims,” some of whom were as young as 14-years-old.

Epstein has pleaded not guilty to the latest charges and his defense attorneys have argued in court that the new indictment is tantamount to “double jeopardy,” the constitutional right that prevents a person from being tried on the same (or similar) charges twice, based on the same facts, following a valid acquittal or conviction.

“It is our belief that this is basically a re-do,” Epstein defense attorney Reid Weingarten told the judge at a bail hearing earlier this month. “This is basically the feds today, not happy with what happened in the decision that led to the NPA, redoing the same conduct that was investigated 10 years ago and calling it, instead of prostitution, calling it sex trafficking. We think that is the heart of everything, and that will be the centerpiece of our defense.”

At the same hearing, prosecutors claimed Epstein tried to buy off potential witnesses and charged that he had demonstrated a “willingness to use intimidation and aggressive tactics in connection with a criminal investigation.” Prosecutors allege that late last year Epstein wired $100,000 from a trust account to a person who had been named in the 2008 case as a possible co-conspirator of Epstein’s and then three days later wired $250,000 to another suspected co-conspirator.

Epstein defense attorney Reid Weingarten did not respond at the time to an ABC News request for comment on prosecutors’ claims of potential witness tampering.