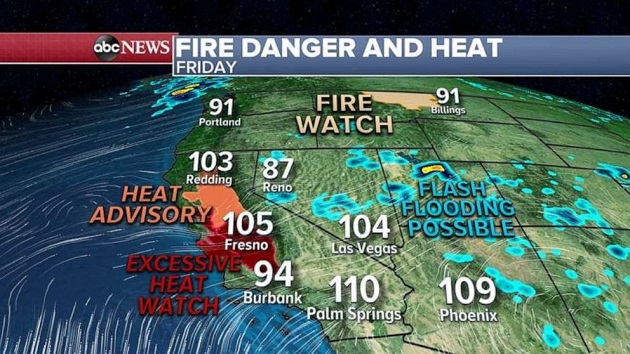 (NEW YORK) — Temperatures are hovering around, or over, 100 degrees across much of California, and there won’t be any relief on Friday.A record high of 97 degrees was recorded in Long Beach, California, and even usually cool Los Angeles International Airport reported a record high of 87. Southern California also saw thunderstorms that produced some rare rain. Los Angeles International Airport had a trace of rain, which was enough to tie a daily rainfall record. Palmdale, in the heart of the desert, got up to 0.03 inches of rain, which was also a daily record.Fewer storms are expected over the weekend in Southern California, as the pattern changes with the heat on for most of California and the West Coast.A heat advisory and an excessive heat watch have been issued for a large part of California, where temperatures this weekend will surpass 110 degrees.Also a fire weather watch has been issued for Montana, due to the forecast gusty winds near 40 mph and low relative humidity. Fires can ignite and spread quickly there this weekend.Temperatures this weekend in some parts of California and near Las Vegas will surpass 110 degrees and even close to 120 in the hottest spots.Meanwhile, in the Midwest and the Northeast the comfortable weather will be ending, with the heat and humidity returning by the weekend and into early next week.It may not be a major heat wave, but a few days near 90 or in the 90s are definitely possible from Chicago to New York City.Copyright © 2019, ABC Radio. All rights reserved.

Britney Spears makes triumphant return to Instagram, but some fans think someone else is running the account
Lil Jon reveals what surprised him most about ﻿’Bachelor in Paradise’
Second dose of J&J COVID-19 vaccine results in stronger protection, company says
Biden to focus on ‘intensive diplomacy’ at UN amid tensions with allies
Republicans dig in on debt-limit standoff despite Democratic effort to mount pressure
‘Dancing with the Stars’ season 30 recap: JoJo Siwa’s historic first performance puts her atop leaderboard