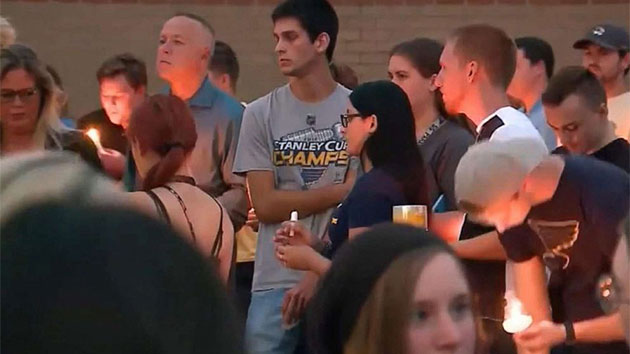 (NEW YORK) —  Friends and former classmates of an Ole Miss student who was gunned down — allegedly by another classmate — gathered at an emotional vigil outside her former high school, where they shared stories of her smile, her desire to help others, and her unique skill of making people feel welcome.

“She had the biggest smile,” friend Samantha Martin told ABC News at the vigil. “She was just the most amazing person … she had a way about her that just made everybody feel welcome and she was so generous… she was never a stranger to anyone.”

“If sunshine was a person, it would’ve been Ally,” Hannah Bartz told ABC News, calling her “one of the kindest people I’ve ever met.”

“She was someone you always strive to be,” Kari Ebmyer told ABC News. “She was so kind and so smart and so down to earth. I know when I was that freshman I was like, ‘I want to be just like her.’ That [person who is] confident, smart, can talk to anybody.”

Kostial’s, riddled with gunshot wounds, was discovered on Saturday in Harmontown, Mississippi, about 30 miles from Ole Miss. The 21-year-old had been on campus for summer school.

Brandon Theesfeld, 22, an Ole Miss classmate, was arrested for murder on Monday.

No motive has been released.

Bartz said she hopes the details surrounding Kostial’s killing will come to light to help bring her family and friends find closure.

“She didn’t deserve what happened to her,” Martin said. “I hope that her memory can live on through all of us who knew her.”

Theesfeld, who is in custody in Lafayette County, Mississippi, has not yet entered a plea. His defense attorney, Tony Farese, told ABC News Thursday that he plans to enter a not guilty plea.

Kostial’s family did not attend the vigil. Her funeral will take place Saturday.