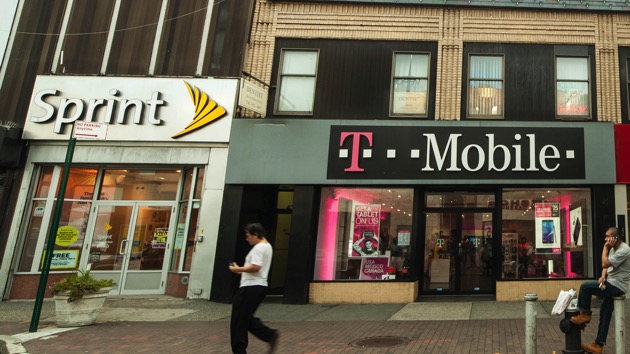 (WASHINGTON) — The U.S. Justice Department announced Friday it has resolved any concerns it had about a $26 billion merger between Sprint and T-Mobile.  The deal was approved by the Department of Justice after attorneys general from five states reached a settlement with the two companies. “I am pleased that the U.S. Department of Justice has reached a settlement with T-Mobile and Sprint.  The commitments made to the FCC by T-Mobile and Sprint to deploy a 5G network that would cover 99% of the American people, along with the measures outlined in the Department’s consent decree, will advance U.S. leadership in 5G and protect competition,” FCC Chairman Ajit Pai said in a written statement announcing the settlement. “In addition, the transaction has garnered bipartisan support, including from Governor Laura Kelly (D-KS), Congresswoman Anna Eshoo (D-CA), and former FCC Commissioner Mignon Clyburn.”Pai said the deal has “potential to help close the digital divide in rural America and maintain our nation’s leadership in 5G.”The companies said Friday in their own written statements that the DOJ’s clearance, which hinges on the companies’ ability to meet requirements set by the department, is a “step forward for the New T-Mobile.””We are ready to bring this supercharged Un-carrier to consumers and businesses across the country, and this milestone brings us much closer to making that vision a reality for customers everywhere!”  T-Mobile CEO and New T-Mobile CEO John Legere said.Sprint Executive Chairman Marcelo Claure added that the New T-Mobile plans to build “one of the world’s most advanced 5G networks, which will massively revolutionize the way consumers and businesses use their connected devices to enhance their daily lives. The powerful combination of 5G, artificial intelligence and the Internet of Things will unleash endless possibilities.”The settlement requires newly merged Sprint Corp. and T-Mobile US Inc. to divest Sprint’s pre-paid businesses, including Boost Mobile, Virgin Mobile and Sprint prepaid to DISH Network.  T-Mobile and Sprint must also make thousands of redundant towers and cell sites available to DISH. Additionally, access to T-Mobile’s 5G Network must also be available to DISH for the next seven years as DISH builds its own network.  DISH Network will become the fourth nationwide facilities based wireless competitor.Copyright © 2019, ABC Radio. All rights reserved.

Generational wealth implications: Black and Latino-owned homes are more likely to be undervalued
COVID-19 live updates: CDC endorses Pfizer boosters for older and high-risk Americans
Man attempts to storm cockpit, strangles and kicks flight attendant on JetBlue flight
A century after arson decimated its Chinatown, San Jose to apologize for past racism and injustices
After people spoke out about COVID-19 vaccines and period changes, research is underway
Billy Bob Thornton and Tania Raymonde on bringing ‘Goliath’ to a close with new fourth season