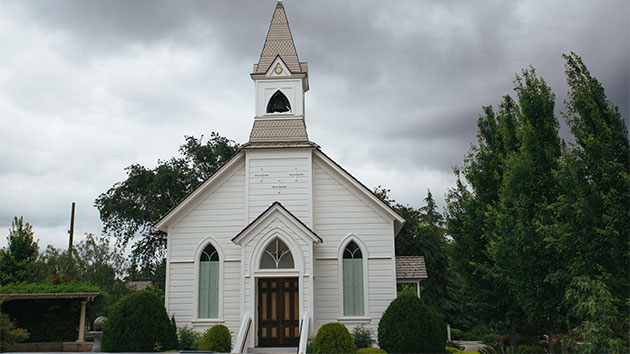 (WASHINGTON) —  Rosa Gutierrez Lopez fled violence in her home country of El Salvador to come to the United States 13 years ago – but last December, she chose to take refuge inside a Maryland church to avoid deportation.

Gutierrez Lopez, a mother of three, now faces an uncertain future along with her three children — all U.S.-born citizens — as she awaits a decision in her case that’s pending before the appellate immigration board.

As of earlier this month, she’s one of an estimated several dozen other individuals who have taken sanctuary inside churches across the country, according to Church World Services.

For a church to become a physical sanctuary takes “a number of steps,” said Abhi Janamanchi, the reverend at Cedar Lane Unitarian Universalist Church where Gutierrez Lopez is staying.

To be a physical sanctuary is also assuming a certain risk, Janamanchi said, but in May 2017 the Bethesda congregation voted on the matter. So, when Gutierrez Lopez reached out 7 months ago, the church was prepared.

“Being engaged in sanctuary work has actually helped us lean into that anxiety and learn more to be present with it, and to recognize that … it guides us both to a deeper place in terms of how our faith guides us, but also to live out what our values are,” he said.

edar Lane Unitarian Universalist Church is part of a broader network of religious communities in the Washington, D.C. area that work with immigrants like Gutierrez Lopez.

“We’re one of the few that have committed to be a physical sanctuary, but these religious communities all come together to be working on other aspects that are also part of sanctuary,” he said.

Gutierrez Lopez’s lawyer, Jasmin Tohidi, explained that after arriving in the United States, Gutierrez Lopez turned herself over to immigration.

“At that time, they gave her a piece of paper in English and released her,” Tohidi said.

What she didn’t realize was at the time was that she was expected to appear in immigration court. Once she missed her initial court date, she was given a deportation order.

It wasn’t until several years later that she learned she had a deportation order, Tohidi said.

Because Gutierrez Lopez’s youngest son has Down syndrome, she applied for multiple stays of removal with U.S. Immigration and Customs Enforcement (ICE) – a way to defer a deportation, Tohidi said, which allowed her to stay in the U.S.

However, one day, Tohidi said, the government changed its position and told Gutierrez Lopez she had to leave.

Despite purchasing a ticket, Gutierrez Lopez was unsure how she was to bring all three of her children back with her to El Salvador. That’s when she decided to seek sanctuary, Tohidi said.

Although she’s been ordered to wear an ankle bracelet, Gutierrez Lopez insisted that she is not a criminal, and only wants a better future for her kids.

She said she started working when she first got to the United States and has paid taxes “every year.”

Through a translator, Gutierrez Lopez told ABC News that her eldest daughter, who just turned 12, used to want to be a veterinarian, but after her family’s experiences, she now wants to be a lawyer who can help immigrants.

“She cries every night,” Gutierrez Lopez said about her daughter.

Gutierrez Lopez said that her children do not know her home country of El Salvador, and have never been there. She said through a translator that she is worried for her children if they were forced to return.

But Gutierrez Lopez said she remains strong through her faith and remains hopeful that immigration does not come for her.

When asked what she would say to President Donald Trump, Gutierrez Lopez said, through a translator, that she would ask him to put his hand on his heart and put himself in their situation.

“We’re all Americans,” Janamanchi said. “And in that sense we not only share a common geography, but also a common culture.”

“That, in many ways, I feel is part of what the dream and ideal of the United States of America is. And I just want to lift that up for us to also remember and to recognize that we have had a very checkered history in not being very nice and very welcoming of immigrants all throughout our history after we colonized these United States that we now tread lightly upon as we should,” he said.

“But it has also been a case where the United States has been incredibly welcoming of people like me who came to this country 25 years ago and chose to become an American citizen in response to that higher ideal.”