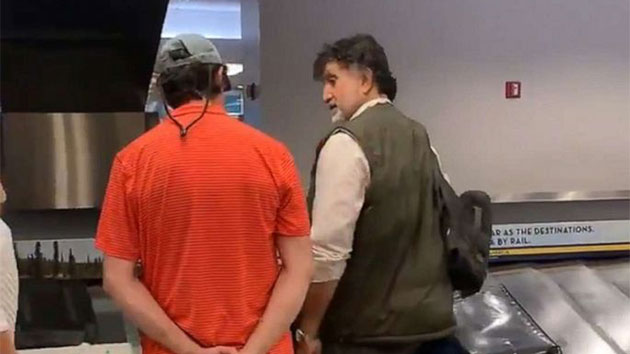 Isabel Godoy via Storyful
Posted on July 26, 2019 by ABC News

(ANCHORAGE, AK) — After more than 20 years, two brothers reunited at an airport in Anchorage, Alaska.

Isabel Godoy captured the emotional moment earlier this month when her father surprised his brother while the two were traveling to Alaska to visit their mother who is battling cancer.

The video, which has been watched more than 6 million times on Twitter, shows Godoy’s father sneak up on his brother, who is intently waiting for his luggage at baggage claim. With some playful gestures, Godoy’s father waits for his brother to notice, which takes a surprisingly long 26 seconds.

Finally, Godoy’s uncle turns and notices her father and the two embrace for the first time in more than two decades.

According to Storyful, the two brothers traveled to separate parts of the world some 20 years ago and hadn’t seen each other since.

Godoy’s father had arranged to catch a flight to Anchorage that would arrive some hours before his brother in hopes of surprising him. If Godoy’s video is any judge, the plan worked like a charm.

Thank you from 2021 Kids in Business! List of winners and photos/videos
The push for electric vehicles may be killing sedans for good: Experts
Culture thrives in America’s most Hispanic, Latino state: New Mexico
Iowa Republican Sen. Chuck Grassley, 88, running for reelection
Harris interview with ‘The View’ delayed after co-hosts test positive for COVID-19
Generational wealth implications: Black and Latino-owned homes are more likely to be undervalued