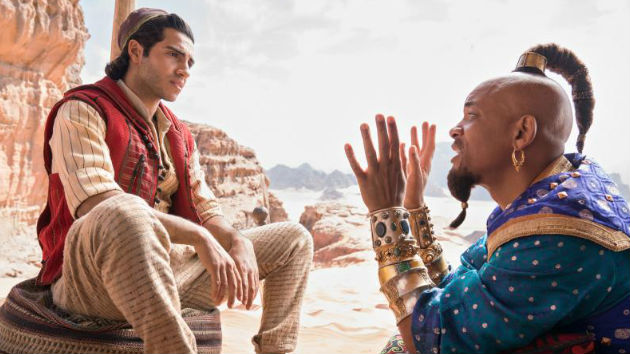 (LOS ANGELES) — Aladdin went from “A Whole New World” to a whole new tax bracket: the live-action retelling of Disney’s animated classic of the same name has crossed the $1 billion dollar mark worldwide.

“We ain’t never had a friend like you!” read the site’s official Twitter, which thanked, “the fans across the globe” for the magical milestone.

Aladdin which was directed by Guy Ritchie, and stars Will Smith as Genie, Mena Massoud as Aladdin, Naomi Scott as Jasmine, and Marwan Kenzari as Jafar, opened May 24. The movie has already flown to the #6 slot on Forbes‘ worldwide list of the highest-grossing fantasy movies of all time — not counting for inflation.

For the record, that current record holder, Harry Potter and the Deathly Hallows Part 2 grossed $1.34 billion worldwide.Disney is the parent company of ABC News.

A century after arson decimated its Chinatown, San Jose to apologize for past racism and injustices
COVID-19 live updates: US records 1.1 million pediatric cases over past five weeks
Army Gen. Mark Milley was ‘not going rogue’ in secret calls to China, authors of new book claim
“The past has caught up with me”: Check out the first trailer for Marvel Studios’ ‘Hawkeye’
Families of Afghanistan troops grieve, reflect on past 2 decades
Mark Proksch reveals his real-life inspiration for his “energy vampire” in ‘What We Do in the Shadows’