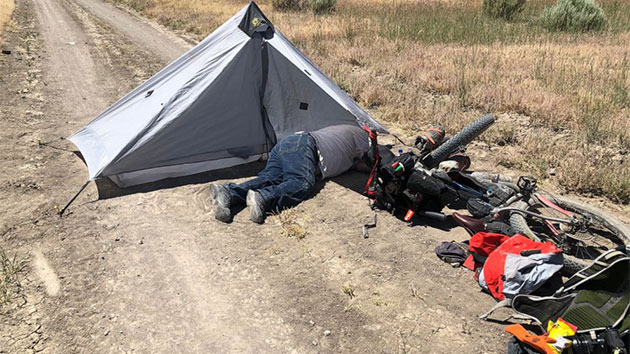 (PORTLAND, Ore.) —   A 73-year-old man was rescued by a mountain biker after he was lost for four days with his two dogs in Oregon’s remote high desert, authorities said.

After Gregory Randolph’s Jeep became stuck in a narrow canyon on July 14, he trekked about 14 miles through rough terrain with one of his dogs before collapsing on a dirt path. He was found by mountain biker Tomas Quinones, nearly unconscious, badly sunburned and severely dehydrated.

Quinones was on day six of a seven-day mountain bike trip through Oregon’s Big Country route when he spotted what he thought was a dead cow lying in the middle of the road. As he neared, he realized it was a person.

After two days without a cell phone signal, Quinones called for help using his satellite GPS “SOS” feature, reserved for emergencies like this. While waiting for authorities he pitched a tent for shade and shared his water with Randolph, who was barely responsive.

An ambulance arrived and rushed Randolph to a local hospital, leaving the dog. Quinones, who was running low on water, packed up his equipment and waited with the dog for police. Shortly thereafter, a deputy arrived and took a report. He then took the dog and left a liter of fresh water to help Quinones to finish his day’s journey.

Lake County Sheriff’s Deputy Buck Maganzini said that Randolph and his dogs are reunited and recovering at home.

Quinones documented his seven-day journey and life-saving encounter on his blog.