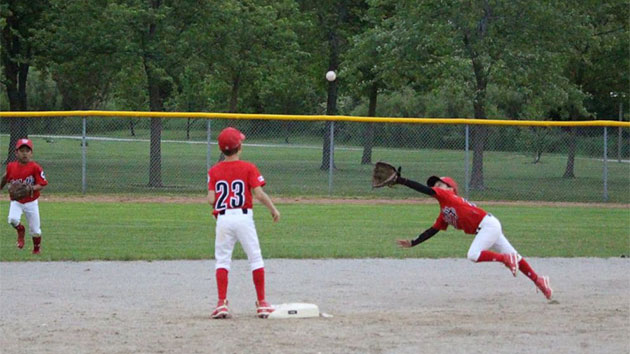 (TORONTO) — This young baseball player is proof that even in the face of a setback, the best thing to do is step back up to the plate and take another swing.

Ashlynn Therien had an impressive season on her co-ed AAA baseball team in Toronto, earning the MVP title at the team’s semi-final game. Despite her success with the Whitby Chiefs at just 7 years old, her dad, Dan Therien, told “Good Morning America” that another parent told him “girls should stick to softball and don’t belong in baseball.”

Simply put, he said his response was, “Well, we don’t put any limitations on our kids dreams and what we want to do.”

The second base superstar dropped down to a single-A team within the same club organization this season where Ashlynn’s skills have only continued to flourish and now other teams, parents and players are paying attention — including the pros.

Ashlynn’s mom, Kerri Jolicoeur, said they “did not tell her” initially what was said last September “because we saw no benefit to that.”

“She just found out when all of this came out this week and we needed to explain so she would know,” her mom said, adding that Ashlynn even asked why a parent would say girls should stick to softball.

“She said, ‘Well I wouldn’t listen to it anyway.’ And that was the end of the conversation,” Jolicoeur said. “We are very proud of her!”

Her high flying catches, double plays and fast fielding skills have garnered attention on social media and even her favorite MLB team, the Toronto Blue Jays, has taken notice.

The young slugger was invited to meet the team for a full VIP experience on Wednesday.

That special moment when you meet your favourite player ❤️Ashlynn, meet Vladdy 🤗 pic.twitter.com/wgPYDDumEz

“I got to watch their batting practice with some of the people on the Blue Jays and they signed my glove,” Ashlynn told “GMA.” “I got to take a picture in the dugout and we got a front row seat behind the Blue Jays dugout.”

She was thrilled to share that she met two of her favorite players, Kevin Pillar and Vladdy [Vladimir] Guerrero Jr. She even got a jersey from the third baseman.

“She was so excited to put it on right away,” her dad said, adding that it was “amazing” for her to meet him. “After he walked away she turned to us with the biggest smile on her face and said, ‘I’m shaking’ — she loved every minute of it.”

Ashlynn, 8, said she’s “basically been playing this since I could walk.”

She never misses an opportunity to keep at it, even during harsh Canadian winters.

“When it’s winter I play in my basement with a tennis ball that I can hit against the wall,” she explained of a footwork and fielding exercise. She started to practice for a new position that she said she hopes to try next year: pitching.

“You wrap a towel around your hand and do a pitching motion to work on your form,” she added.

While the Eastern Ontario Baseball Association encourages girls to play, her parents said Ashlynn is the only girl on the team this year. Just a few girls play in the 14-team league.

“Every kid has grown a lot and Ashlynn’s skill level is really high,” her dad said proudly. “[She’s] grown stronger and faster and gotten better throughout the year.”

Baseball For All, an organization that promotes and supports girls playing baseball, also took notice of Ashlynn’s skills on the diamond and invited her to register for its annual tournament that starts July 31 in Rockford, Illinois.

Her dad said she has been placed on the San Francisco Bay Socks team where Ashlynn will play alongside 350 girls from around the world in the largest all-female tournament in the country.

“We shared the post of Ashlynn on our social media because you can see how much she loves the game and how talented she is,” Justine Siegal of Baseball for All told “GMA.”

Ashlynn, 7, was told that “girls shouldn’t be playing baseball.” Here’s her response: pic.twitter.com/KHCcZBBgZe

“Ashlynn represents many of our girls who love baseball and yet were told they should quit because they were girls. Ashlynn shows that when you don’t give up and keep working hard, dreams can come true,” she said.

“She’s a great teammate, always encouraging them, always calling out the plays and [she] is a real leader out there — it’s pretty neat how well the team gets along,” Dan Theiren said. “I don’t think it has ever occurred to Ashlynn that some people think that girls can’t do things that boys can do.”

Her parents also clarified that the move to single-A has been a great experience and gave their daughter a chance to learn from a wonderful new coach.

“Ashlynn is very lucky to have a coach who not only believes in her, but wants her to succeed in reaching her full potential as much as we do,” her mom said.

So far this year, her dad said she has been named MVP, which is handed out by the opposing team at tournaments, and has “won quite a few player of the game this season.”

Last year Ashlynn “said something to me that that stood out talking about practicing and wanting to get better,” Kerri Jolicoeur recalled.

“She said, ‘Even the best have to work hard every day, otherwise someone else can come and be better than them.’ To be so young and have that mindset on her own is amazing.”

These vaccine mandates are already in place to attend school in the US
Jennifer Aniston says season 2 of The Morning Show ﻿will tackle cancel culture
Apprehensions at the southern border surpass 200,000 in August
Now you can own James Bond’s DB5 — the book, that is
Democratic drama as House advances Biden’s agenda: What’s in the draft reconciliation bill?
Andrew Garfield details the “amazing, beautiful way” he honored his late mother with musical film ‘Tick Tick… Boom!’