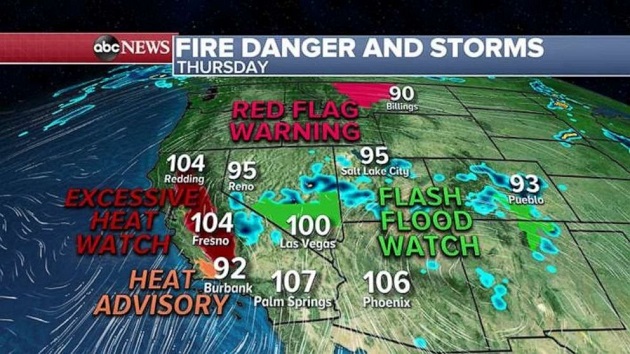 (NEW YORK) — There are more than 120 large wildfires burning in the Unites States Thursday morning, most of them in the West and Alaska.In the West alone, 48 large fires are burning with additional small brush fires popping up in hot spots. The Museum Fire, near Flagstaff, Arizona, is 1,887 acres and only 12% contained, but an evacuation order has been lifted due to the higher humidity, lower temperatures and monsoon rain.Hot weather, with locally gusty winds, sparked a few brush fires from the San Francisco Bay area down to Los Angeles on Wednesday.Several record highs were broken and tied in Southern California, including one in Long Beach, where the temperature reached a record-tying high of 99 degrees.Looking forward, monsoon storms are still forecast for Thursday in the Southwest and southern Rockies from California to Colorado, where flash flood watches have been issued.The heat will increase in the coming days, especially in California where numerous heat watches, warnings and advisories have been issued.Gusty winds up to 40 mph are expected in Montana, where red flag warnings have been posted.The heat is on this weekend from Sacramento to Las Vegas, and even into Phoenix, where some cities could see high temperatures a little over 110.Desert temperatures could even reach into the 120s in Southern California.

After quitting the fashion industry, supermodel Halima Aden is back — this time, on her own terms
6-year-old boy follows mom’s instruction to leave mask on at school, wears it in school photo
Will Smith discusses his open marriage with Jada Pinkett-Smith: “Jada never believed in conventional marriage”
How Lee Pace got into godly shape for Apple TV+’s sci-fi epic ‘Foundation’
Legacy and landscape at stake for Pelosi, Biden: The Note
“I got my a** kicked for speaking up”: Katherine Heigl supports union by revisiting controversial comments