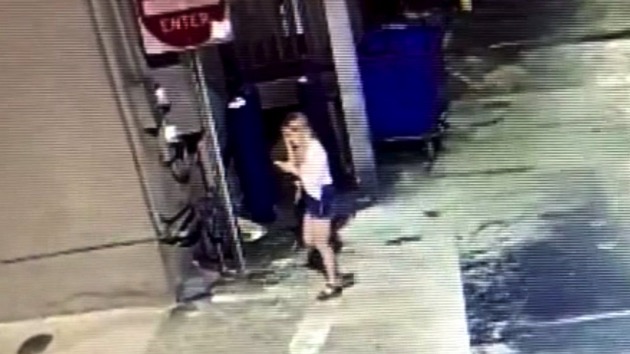 (OXFORD, Miss.) — Chilling surveillance video shows an Ole Miss student out on the last night of her life before she was killed allegedly by a college classmate.Alexandria “Ally” Kostial’s body, riddled with multiple gunshot wounds, was discovered in Harmontown, Miss., Saturday morning, authorities said. Brandon Theesfeld, 22, was arrested Monday for murder.Around 11:52 p.m. Friday, the night before her body was found, Kostial was seen on video walking out of Funky’s Bar in Oxford, the Ole Miss college town about 30 miles from Harmontown.In the video, the 21-year-old walks across a street, down a sidewalk, around a building and out of view.Several minutes later, a gray rideshare van pulls up to the corner, according to police. Kostial gets into the van, and just before midnight, the van drives off.The college student appears to be alone the entire time, only seen on video interacting with the rideshare driver and someone at the door of the bar.Deputies on a routine patrol found her body by a lake the next morning.Kostial, a St. Louis native studying marketing at Ole Miss’ School of Business Administration, was in Oxford for summer classes, according to her father.Theesfeld, also student in the School of Business Administration, has since been suspended from the university, according to the school.The 22-year-old has not yet entered a plea. His defense attorney, Tony Farese, told ABC News Thursday that he plans to enter a not guilty plea.Theesfeld’s father told ABC Dallas affiliate WFAA on Tuesday, “I’ve spoken to Brandon. I ask that everyone give him the benefit of the doubt that he is innocent.”Theesfeld and Kostial knew each other for four years, Kostial’s college friend, Rachel Macdonald told ABC News earlier this week.”I never would’ve seen him doing that,” said Macdonald, who said she’s known Theesfeld for about two years. “Not to say that he couldn’t, ’cause anyone’s capable of anything.””The fact that it happened to Ally, it’s so hard to believe,” Macdonald said. “It’s so sad and she didn’t deserve this. No one deserved that.”Her funeral is set for Saturday.

“You’re kidding me!” Stunned Ashley Graham confirms she’s having twin boys in sweet video
Over 200 companies pledge net-zero emissions by 2040 as pressure on private sector mounts
Cynthia Erivo salutes Michaela Coel on her historic Emmy win: “Proud is an understatement”
Gillian Anderson’s Emmy night: Yes, she’s American; no, she hasn’t spoken with long-dead Margaret Thatcher
Biden administration to ease restrictions on travelers to US in November
Kelly Clarkson explains what keeps her coming back to ‘The Voice’