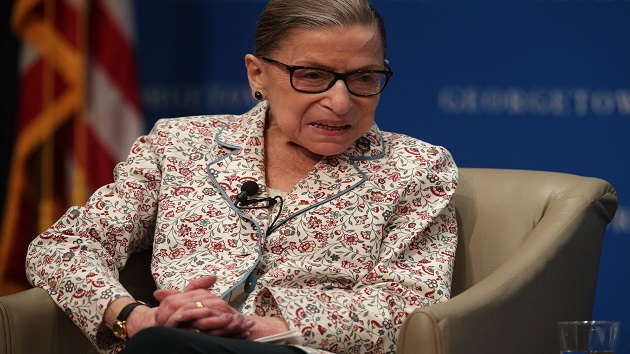 (NEW YORK) — Supreme Court Justice Ruth Bader Ginsburg reflected on her health amid concerns for the 86-year-old, who underwent cancer surgery in December that caused her to miss oral arguments for the first time in 25 years.The progressive justice, who has become a pop culture icon dubbed “the Notorious RBG” and a hero for young activists, dismissed concerns over her health in an interview with NPR published Tuesday, saying she is “very much still alive.””There was a senator, I think it was after my pancreatic cancer, who announced with great glee that I was going to be dead within six months,” Ginsburg said. “That senator, whose name I have forgotten, is now himself dead, and I am very much alive.”Ginsburg underwent surgery for colon cancer in 1999, and was later diagnosed with pancreatic cancer.The justice did not name a senator in her NPR interview, but in 2009, the late Sen. Jim Bunning, a Kentucky Republican, made controversial remarks about her health.”Even though she was operated on, usually, nine months is the longest that anybody would live,” he said, but later apologized amid criticism.”I am pleased to report that, contrary to Sen. Bunning’s prediction, I am alive and in good health,” Ginsburg said at the time.Progressives had been particularly concerned over Ginsburg’s health in recent years, fearing that if she can no longer serve or retires, this would give President Donald Trump the opportunity to nominate another conservative justice.During his presidency, Trump has already appointed two justices to the court — Neil Gorsuch and Brett Kavanaugh.Ginsburg returned to the bench for oral arguments in February after recovering from her surgery to remove cancerous nodules from her lung.She was nominated to the Supreme Court in 1993 by former President Bill Clinton, becoming the second woman ever, following Sandra Day O’Connor, to serve on the nation’s highest court. She is currently the oldest justice serving on the bench.Copyright © 2019, ABC Radio. All rights reserved.