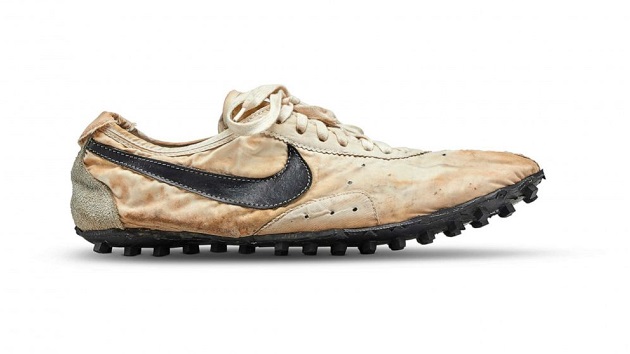 (NEW YORK) — A rare pair of Nike sneakers with a storied history has just shattered auction records.Sotheby’s auctioned off the Nike “Moon Shoe” for $437,500 Tuesday night, “far surpassing” the pre-sale high estimate of $160,000, the auction house said in a press release. The previous world record for sneakers sold at auction was set in 2017 for a pair of signed Converse worn by Michael Jordan in the 1984 Olympic basketball final.Just 12 pairs of the Nike Waffle Racing Flat, or Moon Shoe, were ever made — and fewer exist today, according to Sotheby’s. They were designed by Nike co-founder and renowned Oregon University Track Coach Bill Bowerman for runners at the 1972 Olympic trials.Bowerman was inspired to create the innovative “waffle” sole traction pattern found on Nike’s early running shoes after tinkering with his wife’s waffle iron, pouring rubber into the mold to create the first prototype for the sole.The sneakers were purchased by “avid collector” Miles Nadal, and are the only known pair to exist in unworn condition, according to Sotheby’s.”I am thrilled to acquire the iconic Nike ‘Moon Shoes,’ one of the rarest pairs of sneakers ever produced, and a true historical artifact in sports history and pop culture,” Nadal said in a statement.A total of 100 pairs of shoes were included in Sotheby’s “Ultimate Sneaker Collection,” which kicked off on July 11 and included collectibles such as two pairs of Nike Mag sneakers, inspired by Marty McFly’s kicks in Back to the Future Part II, and five pairs of the sneakers designed by Travis Scott for his Travis Scott x Air Jordan 4 “Friends & Family Collection.”Last week, Nadal offered to buy the entire lot, but the auction house decided to let him purchase all but one pair in the private sale — the Moon Shoe remained on auction until Tuesday.Nadal paid a whopping $850,000 for the other 99 pairs, according to Art Net. His sneaker splurge tallied in at nearly $1.3 million, according to reports.The entrepreneur and philanthropist said he was determined for the Moon Shoe “to remain part of this remarkable collection.””I couldn’t be happier with the result,” he said. “I think sneaker culture and collecting is on the verge of a breakout moment, and I hope Sotheby’s and Stadium Goods will continue to lead the way in this exciting new future.”All of the sneakers will be displayed along with Nadal’s collection of classic cars at his private museum in Toronto, according to Sotheby’s. He plans to open the museum to friends, family, charitable organizations and others upon requests. Copyright © 2019, ABC Radio. All rights reserved.