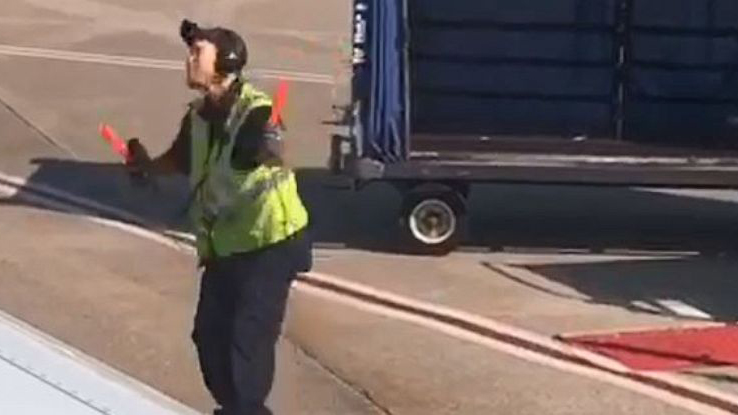 (NASHVILLE, Tenn.) — An airline employee in Nashville decided to dance like no one was watching, but thankfully one attentive passenger caught the joyful moment on camera.Suzanne Durham told ABC News she had barely settled into her seat when she noticed an American Airlines employee spinning and skipping on the tarmac at Nashville International Airport.”I was on the phone and looking out the window and he was literally out there dancing and doing all these moves with the luggage cart initially,” she recalled. “I said, ‘I hope I capture him on video’ because he was just pure joy.”Luckily, the prancing employee popped back out and Durham was able to record the second part of his performance.”All of a sudden he just starts dancing,” she said as she captured the man in the bright yellow vest in front of gate C11. “He is magic and we need this kind of joy in our lives.””Crew chief Isiah Foster [is] proving that when you love what you do, you can dance on the fly,” a spokeswoman for American Airlines told ABC News.Durham, a music producer based in Nashville, said that she travels “all the time” for her job and knew she had to share this moment on social media.”Part of my job I do social media, so I was just looking and thought, ‘Oh man I have to record this,"” she said.Her inclination was right because the video of Foster that she posted on Twitter has been viewed over 10,000 times and counting.

‘Ted Lasso’ Emmy winner Brett Goldstein has been off the market, his comedienne girlfriend confirms
Gabrielle Union calls out Hollywood’s pay disparity among actors of color
Demetrius Flenory Jr. shares the emotional reaction his family had to his portrayal of father Big Meech in ‘BMF’
Elizabeth Holmes criminal trial dominated by allegations of deception and intimidation from those who worked for her
Tobias Menzies dedicated his Emmy win for ‘The Crown’ to the late Michael K. Williams
‘Dancing with the Stars’ season 30 recap: JoJo Siwa’s historic first performance puts her atop leaderboard