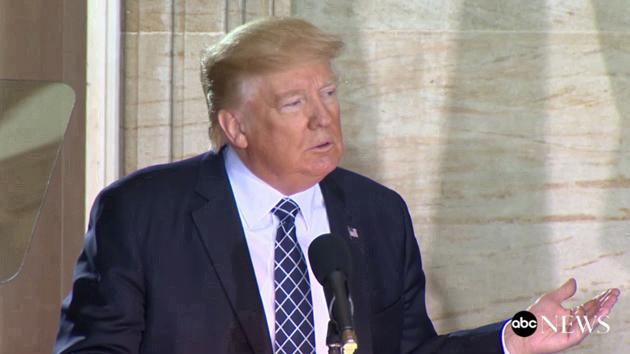 (WASHINGTON) — During Robert Mueller’s more than six hour historic congressional testimony Wednesday, the former special counselor disputed several of President Donald Trump’s talking points on 2016 Russian interference in U.S. elections.For nearly two years we’ve seen on Twitter and heard in various photo ops and interviews the now infamous lines from Trump to discredit the investigation — that it was a “witch hunt” and Russian interference is a “hoax.”Yesterday, Mueller contradicted those assessments during the first line of questioning in the House Intelligence Committee hearing from the chairman, Rep. Adam Schiff, D-Calif.”Your investigation is not a witch hunt, is it?” Schiff asked.”It is not a witch hunt,” Mueller said.”When the president said the Russian interference was a hoax, that was false, wasn’t it,” Schiff asked.”True,” Mueller answered. Even before Mueller’s redacted report was made publicly available in April, President Trump was touting that the investigation’s conclusion had exonerated him.”It was a complete and total exoneration,” Trump said in March, shortly after Attorney General William Barr released a letter which he said summarized Mueller’s chief findings.But Mueller’s report, released a month later, challenged Trump’s claim. In the report, Mueller wrote that he did not find evidence to suggest that members of the Trump campaign or anyone associated with it conspired or coordinated with the Russians, but his team declined to make a traditional prosecutorial decision on obstruction of justice matters, and even went further to say if they could have cleared him they would have done so in the report.”While this report does not conclude that the President committed a crime, it also does not exonerate him,” Mueller wrote in the report.During his testimony on Wednesday, Mueller did not back down from that assertion.”And what about total exoneration? Did you actually totally exonerate the president?” House Judiciary Chairman Rep. Jerry Nadler, D-N.Y., asked.”No,” Mueller answered. Nadler also pressed Mueller on whether his report found “no obstruction,” as the president has claimed numerous times.”So the report did not conclude that he did not commit obstruction of justice? Is that correct?” Nadler asked.”That is correct,” Mueller said. Trump for the past two years has also claimed that the report found “no collusion,” and Mueller made it a point to say during his testimony that this is in fact not accurate.”We did not address collusion,” Mueller said.Mueller also contradicted Trump’s claim that he interviewed with the president for the FBI Director job.”My understanding is I was not applying for the job. I was asked to give my input on what it would take to do the job,” Mueller stated. During Trumps’ interview with ABC News Chief Anchor George Stephanopoulos the president revealed that if a foreign government provided information to him on a political opponent that he would accept the information.”It’s not an interference, they have information — I think I’d take it,” Trump said. “If I thought there was something wrong, I’d go maybe to the FBI — if I thought there was something wrong. But when somebody comes up with oppo research, right, they come up with oppo research, ‘oh let’s call the FBI.’ The FBI doesn’t have enough agents to take care of it. When you go and talk, honestly, to congressman, they all do it, they always have, and that’s the way it is. It’s called oppo research.”During Mueller’s testimony, Schiff asked Mueller if accepting help from a foreign government is an unethical thing to do.”From your testimony today, I gather that you believe that knowingly accepting foreign assistance during a presidential campaign is an unethical thing to do,” Schiff said.”And a crime, given certain circumstances,” Mueller responded.Unsurprisingly, Trump after the hearing stuck to his talking points, once again calling the investigation a “hoax.””There was no defense for this ridiculous hoax,” Trump told reporters as he left the White House for a GOP campaign fundraiser in West Virginia. “So, this was a very big day for our country, this was a very big day for the Republican Party. And you can say it was a great day for me but I don’t even like to say that,” Trump said. He added that Mueller did a “horrible job” in his testimony and how he handled the investigation into Russian interference in the 2016 elections and whether the Trump campaign colluded with the Russian government and individuals tied to the Kremlin, but offered a backhanded defense of Mueller by arguing he had no material to work with.”Robert Mueller did a horrible job today and with respect to the investigation. But in all fairness the Robert Mueller, he had nothing to work with, you know, you can be a builder, but if they don’t give you the right materials, they’re not going to build a very good building. Robert Mueller had no material,” Trump said.To counter the hearing, a spokesperson for the Republican National Committee said Republicans were working with the Trump campaign on sharing research and pushing legal experts and committee members to be interviewed on TV.