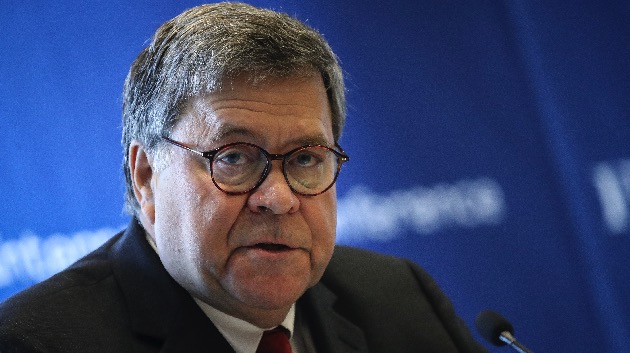 (WASHINGTON) — Attorney General Bill Barr announced Thursday the federal government will be resuming capital punishment.In the announcement, the U.S. Department of Justice said the decision was made related to “five death-row inmates convicted of murdering, and in some cases torturing and raping, the most vulnerable in our society — children and the elderly.”The DOJ further added that Barr had directing Acting Director of the Federal Bureau of Prisons to “schedule to executions” of those five individuals.”The Justice Department upholds the rule of law — and we owe it to the victims and their families to carry forward the sentence imposed by our justice system,” Barr said in the announcement.According to the Justice Department, the inmates to be executed include a member of a white supremacist group who murdered a family of three and threw them into the Illinois Bayou in Arkansas in 1999. Another is a man who stabbed to death a 63-year-old grandmother and forced her granddaughter to sit next to her dead body on a “30 to 40-mile drive” before then murdering her as well.DOJ says all executions will take place at U.S. Penitentiary Terre Haute, Ind.The issue of the death penalty has been a tug-of-war between states and the federal government.According to the Death Penalty Information Center, 78 defendants have been sentenced to death between 1988 and 2018. Only three have been executed and 12 were removed from death row.In late May, New Hampshire became the latest state to ban the death penalty on the state level. Prior to the New Hampshire vote, there were 30 states that still had the death penalty, though four of those states have moratoriums in place banning executions.One such moratorium was put in place in California in March, which was significant because the Golden State has a sizeable death row population but hadn’t performed an execution for years. Copyright © 2019, ABC Radio. All rights reserved.