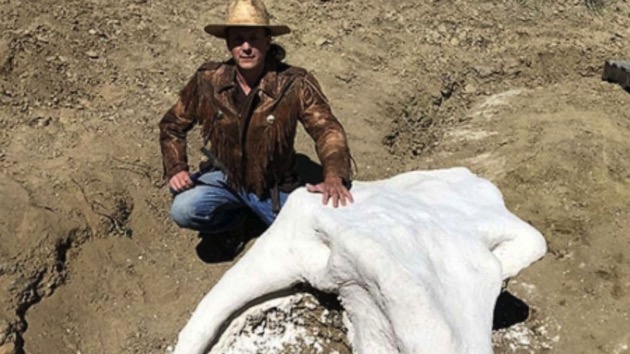 (MERCED, Calif.) — A 23-year-old college student has fulfilled his childhood dream of working with dinosaurs and helped discover a Triceratops skull during a dig in North Dakota.Harrison Duran, a biology student at the University of California at Merced, stumbled upon the 65-million-year-old dinosaur skull on June 4 as he worked alongside Michael Kjelland, a professor and experienced excavator, during a two-week dig in the Badlands of North Dakota, according to a press release from the university.Duran, described by the university as a “longtime fan of dinosaurs,” told Kjelland something along the lines of, “I don’t know if you realize it or not, but this is one of the highlights of my life,” the professor said.“I can’t quite express my excitement in that moment when we uncovered the skull,” Duran said in a statement. “I’ve been obsessed with dinosaurs since I was a kid, so it was a pretty big deal.”Kjelland, a biology professor at Mayville State University in North Dakota, arranged for a dig at the Hell Creek Formation, a “world-famous dinosaur fossil site” where he had found a Triceratops skull the year before.Kjelland had invited Duran along after meeting him at a biotechnology conference, where Duran informed him of his love of fossils and dinosaurs, Kjelland told ABC News.The first day of the dig, they didn’t find much — just some fragments of dinosaur bones, Kjelland said. Three days later, Kjelland decided to venture around the corner to a ravine that hadn’t been searched before and spotted something that he first assumed was a piece of wood.Kjelland called Duran over after noticing vein grooves in the dinosaur’s neck frill and what looked like the base of a brow skull.”So, we knew right away what that was,” he said.The excavating process involves a “painstaking” and delicate process to unearth the specimen “little-by-little,” Kjelland said. Since the fossil basically “just wants to crumble,” they must brush away a half an inch at a time before applying a specialized glue to solidify bones, and repeat until the fossil is completely uncovered, he said. An accelerant is then applied to bond the structures.It took about a week to fully excavate the skull, which was then coated in foil and plaster, wedged onto a makeshift box and lifted onto a truck with the help of a local cattle rancher and his family, according UC Merced.Although the skull they found was partial, it was more complete than Kjelland expected it to be.The Triceratops to which the skull belonged was named “Alice” after the woman who owns the land where it was found, according to UC Merced.In the past, Kjelland has found turtle shells and crocodile teeth in the area, which shows that the region used to be much warmer and humid — the type of climates you may find in Florida or on the coasts of Mississippi or Texas.Local landowners allow Kjelland to access thousands of acres of land in the region, he said. He is currently working on another Triceratops skull, currently named “Skull X,” as well as various bones, such as vertebrae and ribs, that belong to three different Triceratops.Alice’s skull is currently behind housed safely in Kjelland’s lab. Duran plans on returning to North Dakota to assist Kjelland with further research and preparing the fossil for display.Kjelland hopes that Alice will serve as an educational tool and travel from museum to museum — and even the UC Merced campus on day — rather than be sold as part of a private collection.”My vision is to have Alice rotate locations,” he said. “The goal is to use this find as an educational opportunity, not just reserve Alice in a private collection somewhere so only a handful of people can see her.”The biology professor said part of the thrill of participating in digs is the uncertainty of what they might uncover, and then trying to piece together the story behind the fossils they do find.”It’s always an awesome feeling, ’cause … you know you’re the first one that’s actually seen this,” Kjelland said. “You don’t know if it’s gonna be a new species or something unique, or what kind of story develops.”Copyright © 2019, ABC Radio. All rights reserved.