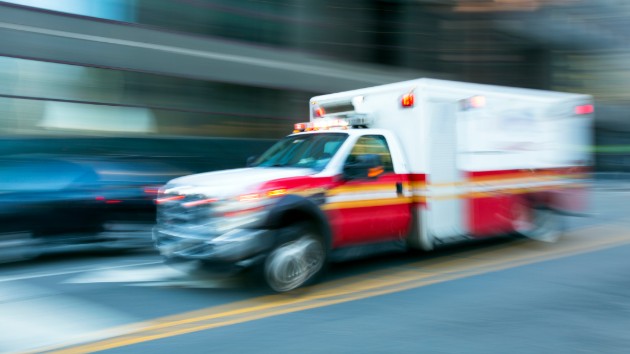 (SAN FRANCISCO) — A California woman who was on an anniversary trip when she was struck by a rented Tesla remained in critical condition in a San Francisco hospital on Tuesday, authorities said. The woman, Kelly Dean, and her husband Benjamin, were in the Bay Area to celebrate their wedding anniversary and were walking in San Francisco’s Tenderloin district when a 21-year old woman in a Tesla she rented through the Getaround app allegedly blew through a red light and struck the couple on Sunday afternoon, police said. On Sunday afternoon, Kelsey Mariah Cambridge, 21, of Vallejo, was driving her rented Tesla, “proceeded through a red light” and “struck a Mini Cooper causing both vehicles to lose control” before striking two pedestrians, San Francisco Police Department (SFPD) spokesperson Adam Lobsinger wrote in a statement.Dash cam video from a nearby Uber driver obtained by San Francisco ABC station KGO-TV showed Kelly Dean throwing her arm around her husband as the car suddenly approached.Both the Deans were taken to San Francisco General Hospital, where Benjamin Dean died.”The drivers of both vehicles were uninjured,” the SFPD statement said. “Both drivers remained on scene and are cooperating with investigators. Alcohol and/or drugs do not appear to be a factor in the collision.”Cambridge was arrested on one count of vehicular manslaughter and one count of running a red light.Kelly Dean remained in critical condition on Tuesday, a spokesperson for San Francisco General Hospital said.”She was incoherent, gurgling noises, she was on her stomach with her head off to one side,” Bob Navarro, who ran to help the couple and stayed with Kelly, told San Francisco ABC station KGO. “I could see a lot of blood coming from her head and we just kept talking to her, talking to her.””We do not know if it was in Autonomous mode or if she was in control of the vehicle,” San Francisco Police Sgt. Frank Harrell told KGO, referring to Tesla’s “Autopilot” feature.Despite the name “Autopilot,” Tesla’s driver assistance technology does not make the vehicle self-driving. The technology is “intended for use only with a fully attentive driver who has their hands on the wheel and is prepared to take over at any time,” according to Tesla’s website.Cambridge rented the Tesla through an app called Getaround, which acts as a kind of Airbnb for cars, in which owners can rent their vehicles to other drivers.Getaround did not respond to ABC News’ questions about the accident.”We are cooperating with police and local authorities investigating this tragic incident, and are not sharing any details out of respect for the families involved and the investigation underway,” a Getaround spokeswoman told ABC News in a statement.Copyright © 2019, ABC Radio. All rights reserved.