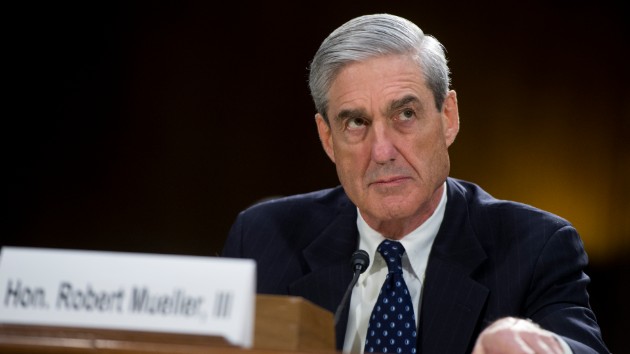 (WASHINGTON) — Former special counsel Robert Mueller arrived on Capitol Hill Wednesday for historic testimony before lawmakers in back-to-back House hearings on his probe into Russian interference in the 2016 presidential election and possible obstruction of justice by President Donald Trump.Democrats on the House Judiciary and Intelligence Committee labored for months to bring Mueller before Congress to answer lingering questions about his 22-month investigation. Mueller was reluctant to appear before Congress, and only agreed to appear under subpoena from both panels. “The report is my testimony,” he said in his only public statement on the report in May. Here is how the day is developing:

9:39 a.m. Republican lawmaker asks Mueller about Peter Strzok controversy “Peter Struck hated Trump. You didn’t know that before he was made part of your team, is that what you’re saying,” Rep. Louie Gohmert, R-Texas, asked about the former FBI agent who exchanged derogatory texts with former FBI lawyer Lisa Page, with whom he was having an affair. House Republicans and President Trump have repeatedly cited Strzok as evidence that Mueller’s investigation was biased from the start. “I did not know that. And when I did find out, I acted swiftly to have him reassigned,” Mueller answered.

9:08 a.m. Republican argues Mueller didn’t give Trump presumption of innocence Rep. John Ratcliffe, R-Texas, a former U.S. attorney, has a pointed back-and-forth with Mueller. He “respectfully” criticizes Mueller’s comments about not exonerating Trump in the report. “Respectfully, respectfully, it was not the special counsel’s job to conclusively determine President Trump’s innocence,” he said, “because there is a presumption of innocence, prosecutors never, ever, need to determine it.” “Nowhere in here did it say write a report about decisions that weren’t reached,” Ratcliffe said. “Americans need to know this as they listen to the Democrats and socialists on the other side of this aisle … volume II was not authorized to be written under this law.” “Donald Trump is not above the law, but he damn sure shouldn’t be below the law,” Ratcliffe added.

9 a.m. Top Republican presses Mueller on collusion “Collusion is not a specific offense or a term of art in federal criminal law. Conspiracy is. In the colloquial context, collusion and conspiracy are essentially synonymous terms, correct?” Rep. Doug Collins, R-Ga., asked. “No,” Mueller said. “On page 180, Volume One of your report, it said collusion is largely synonymous with conspiracy as that crime is set forth. Now, you said you chose your words carefully. Are you contradicting your report right now?” Collins asked. “Not when I read it,” Muller answered. “So, you would change your answer to yes, then?” Collins asked. “No,” Muller said. “I’m reading your report, sir. Is it or a yes or no answer. Page 180, Volume 1. This is from your report,” Collins added. “Correct. And I leave it with the report,” Muller said.

8:52 a.m. Nadler asks the first question “Director Mueller, the president has repeatedly claimed that your report found there was no obstruction and that it, completely and totally exonerated him. But that is not what your report said, is it?” Nadler asked. “Right, that is not what the report said,” Mueller said. Nadler then asks if the report totally exonerates Trump of obstruction of justice as the president has claimed. “So, the report did not conclude that he did not commit obstruction of justice? Is that correct,” Nadler said. “That is correct,” Mueller answered. “And what about total exoneration? Did you actually totally exonerate the president,” Nadler asked. “No,” Mueller said. 8:42 a.m. Mueller is sworn in “It is unusual for a prosecutor to testify on a criminal investigation. And given my role as a prosecutor there are reasons why my testimony will necessarily be limited,” Mueller said in his opening statement. “I also will not comment on the actions of the Attorney General or of Congress. I was appointed as a prosecutor, and I intend to adhere to that role and to the Department’s standards that govern it,” Mueller added.

8:36 a.m. Judiciary Chairman Nadler gives opening statement “Director Mueller, we have a responsibility to address the evidence that you have uncovered. You recognize as much when you said, ‘The Constitution requires a process other than the criminal justice system to formally accuse a sitting president of wrongdoing.’ That process begins with the work of this committee,” Rep. Jerry Nadler, D-N.Y., said. “This hearing is long overdue. We’ve had the truth for months — no American conspired to throw our elections. What we need today is to let that truth bring us confidence and closure,” Rep. Doug Collins, the top Republican on the committee, said in his opening statement.

7:53 a.m. Mueller arrives at Capitol Hill Mueller arrived amid a crush of reporters and cameras for his congressional testimony in front of the House Judiciary Committee but made no comment.Mueller testifies first before the Judiciary Committee for three hours, before fielding questions from the House Intelligence Committee for two hours. The first hearing will focus on Volume II of the Mueller report, which detailed ten instances of possible obstruction of justice by President Trump. The second hearing will center on Volume I of the report, which focused on Russian efforts to interfere in the 2016 White House race.Lawmakers have spent weeks preparing for the hearings, and continued to prepare for the back-to-back rounds of questioning well into Tuesday evening, fielding a last-minute request from Mueller that Aaron Zebley, his longtime chief of staff, be sworn in to appear alongside him in front of the committees. A committee spokesman said Zebley would appear with Mueller on Wednesday as his counsel.Democrats and Republicans on the House Judiciary Committee have each held mock hearings, with committee staffers playing the role of Mueller. The former special counsel has prepared with a cadre of longtime aides at the WilmerHale law firm, where he worked before accepting the special counsel appointment.Trump has attacked Mueller ahead of the hearing, and said he may “see a little bit of it” on television.On Monday, the Justice Department attempted to limit elements of Mueller’s testimony, saying in a letter to the former special counsel that he “must remain within the boundaries” of the public report on his investigation.