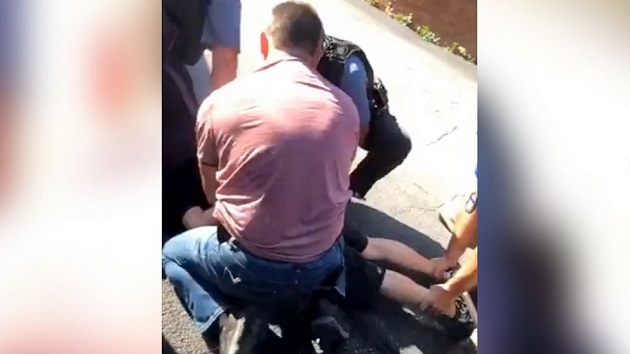 (KANSAS CITY, Mo.) — U.S. Immigration and Customs Enforcement agents in Kansas City, Missouri smashed a car window to arrest a man with his children in the backseat, video streamed live on Facebook by his partner shows. Cheyenne Hoyt and her boyfriend, 32-year-old Florencio Millan-Vazquez, were taking their 7-month-old daughter to the doctor Monday morning when a jeep pulled in front of them “as soon” as they got in the car, Hoyt told reporters at a press conference. The couple’s 11-year-old son was also in the car, ABC Kansas City affiliate KMBC-TV reported. A man then exited the jeep and ordered Millan-Vazquez to get out of the car, Hoyt said, adding that the man identified himself as an ICE agent and stated he had a warrant for Millan-Vazquez’s arrest.The agents did not show the family a warrant, Hoyt said. Local ICE officials said they didn’t have to, and noted the man had entered the U.S. illegally twice, which is a felony.Hoyt posted a 32-minute video to Facebook Live documenting the incident, which had been viewed more than 56,000 times by Tuesday afternoon.For more than 20 minutes after the video began, Millan-Vazquez refused to comply with the officers’ orders to open the door.At one point, Millan-Vazquez told the officers that they “just can’t” break his window, and one officer responded by instructing him and the passengers to cover their face and eyes.”We’re going to do it the hard way, or the easy way,” a man in a pink shirt told Millan-Vazquez. “It’s up to you.”The man then smashed the window and unlocked the door before Millan-Vazquez was pulled out by another officer.Hoyt said she told Millan-Vazquez “not to resist because I didn’t want them to shoot him in front of my kids.””I didn’t know how far they were willing to escalate this — how far they were willing to show that they didn’t care that the kids were in there,” Hoyt told reporters.A child inside the car could be heard in the video whimpering in the back seat.”I’m scared,” the boy says.An agent later approached and asked the boy if he was hurt in the incident, and he replies, “The glass hit me, but I didn’t get cut.”ICE officers were “left with no other choice” than to physically remove Millan-Vazquez from the car after “attempting to negotiate” with him for about 25 minutes, ICE spokesman Shawn Neudauer said in a statement to ABC News, describing Millan-Vazquez as “uncooperative.”Millan-Vazquez, who is from Mexico, has a prior criminal history that includes misdemeanor offenses, Neudauer said.A federal immigration judge granted Millan-Vazquez voluntary departure in 2011, and he complied by returning to Mexico, Neudauer said. Five days later, he was “encountered by immigration officials after he illegally re-entered the United States under an assumed name,” and an expedited removal ordered was then issued.An alien who re-enters the U.S. after having been previously deported commits a felony, which is punishable by up to 20 years in federal prison, according to ICE.Millan-Vazquez will remain in ICE custody until he is deported to Mexico, Neudauer said. Copyright © 2019, ABC Radio. All rights reserved.